We would like to apologise for the slight delay in our announcement – we had an incredibly high number of votes this year, many of which were last-minute, and we have processed and confirmed your votes as quickly as we can.

There are twenty-one new entries in the Top 50 this year, and we received votes from over eighty countries across the world. You nominated over four-hundred different performers and community members.

When we launched the voting for 2010, we asked people to consider the non-performing members of the community that work equally as hard and contribute so much, and several non-performers received a high number of votes this year. However, none of them quite made the Top 50.

We have decided to make two extra announcements this year. When we have announced the Top 50, we will also announce the Top 10 Highest-Polling Non-Performers – many of which received a large number of votes and should be celebrated.

We have also decided to release a list of 100 – 51. Hundreds of individuals were nominated, and so many wonderful and popular performers polled very closely together, but didn’t make it into the Top 50. Therefore, in the interests of celebrating as many people as possible, we thought you would like to see this list as well.

Wow… Did it just get a lot hotter in here…? 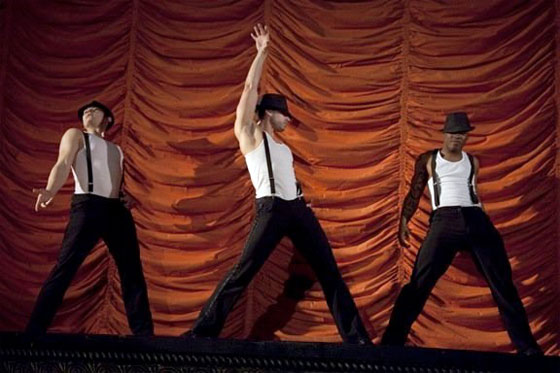 ‘Brought together by Reigning King of Burlesque 2009, Hot Toddy, the Stage Door Johnnies are Chicago’s only all male burlesque group.  Performers Ray Gunn, Jett Adore, and Bazuka Joe give the audience a rare glimpse at classic burlesque with a male twist. In a world dominated by female performers, these feather-fanning, balloon-popping, strip-teasing pin-up boys have taken advantage of their male anatomy, bringing you a good ol’ fashioned nudie show… with balls!’

A trio of talented hunks at No. 20, who entertain just as much as individuals as they do together.  In 2010, Ray and Joe worked it at the Windy City Burlesque festival, and Jett had the audience foaming at the mouth at the Montreal Burlesque Festival…

Keep up the good work lads – we’re impressed and excited in equal measure! 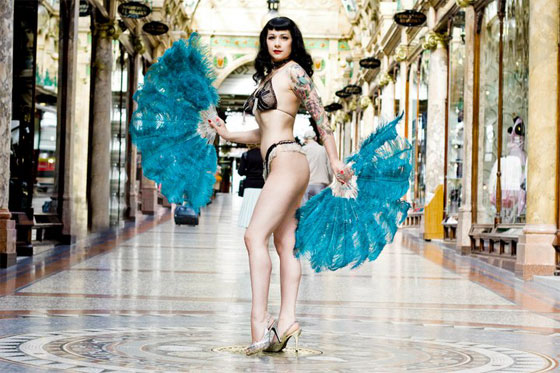 We are pleased to see that our favourite burlesque superhero has made the Top 50 again this year. (Seriously – why has a fully poseable Anna Fur LAction Figure™  with an array of outfits and accessories not been produced yet?! We want little playsets too –  with little axes and tea trays and stuff. Anyway… )

In 2010, Anna proved that she can be adorably quirky and breathtakingly classy. We adore Tourbillon – and Anna’s pink Golden Era costume is stunning. (Captured beautifully by Neil Kendall here…) As usual she has been constantly on the move – making appearances in Milan, Zurich, at Dadalesque in Liverpool, the Rome Burlesque Festival, and the Windy City Burlesque Festival, as well as running a new Confidence on Camera workshop.

Anna is one of the most sincere, grateful and grounded performers we know, and we have no doubt she will continue to be very successful and highly respected wherever she goes in 2011. 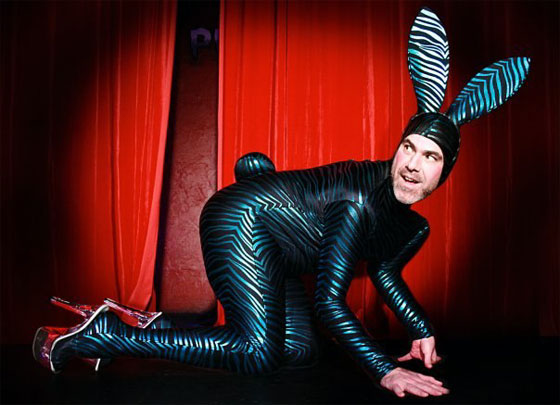 ‘Since 1996, Scotty the Blue Bunny has performed his special brand of spandex-clad spectacles from Nashville, Tennessee (Panty Raid Burlesque) to Helsinki Finland (Helsinki Burlesque Festival).  He sings, speils, offends, cajoles, fiddles, twirls baton, and busts really big balloons with his butt.  And on  occasion will orate in the agitational-propaganda humorously confrontational style of his time…’

It’s great to see Scotty make the Top 50 this year. He hosted at the New York Burlesque Festival Opening Night Gala, and was invited to preside over events in London, Stockholm, Amsterdam, Seattle, Vancouver and San Fransisco. The busiest bunny in burlesque! 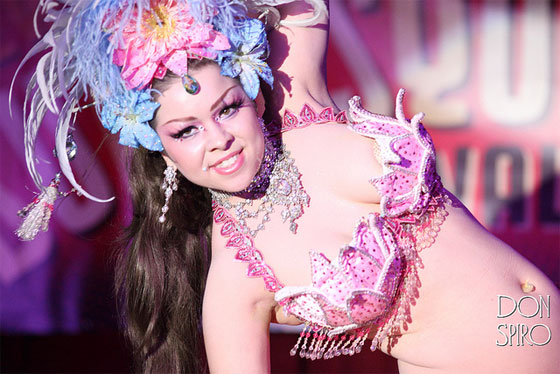 A burlesque butterfly with bright, luminous wings; Amber travels the world with her brand of “Professional Sensationalism”.

Amber’s costumes are always gorgeously colourful and embellished, but in 2010 we think she really surpassed herself. At BHoF in June she competed with her Lotus Blossom act, which she performed again at the New York Burlesque Festival. The costume is just beautiful – the lotus petal bra, the flower and feather tasselled headdress, the sheer pink robe concealing it all from view… All the little details and soft feminine layers and colours make it a fantastical feast for the eyes, with Princess Amber in the centre, rotating beguilingly on her lotus flower.

A beauty who creates beauty – you can always rely on Amber to create something bright, sensual and inviting… 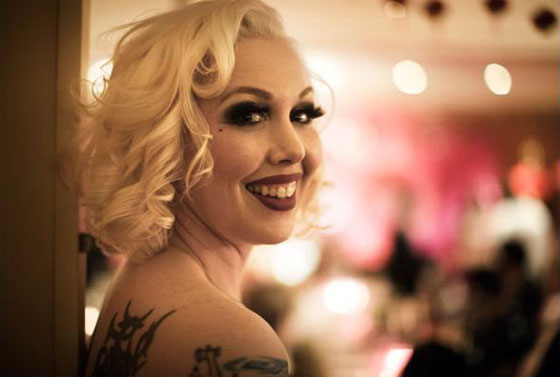 We are not at all surprised to see Mimi in the Top 20 this year. Mimi is one of burlesque’s rockstars – her performances are a seductive combination of femininity and rebellion. She gave a great performance at BhoF in 2010, earning the title, ‘Most Classic’, but most people are celebrating her lead role in Mathieu Amalric’s Tournée (‘On Tour’).

If you are puzzled  – please make a point of looking up this film as a matter of urgency! Mimi and her fellow Cabaret New Burlesque members – Dirty Martini, Julie Atlas Muz, Roky Roulette, Evie Lovelle and Kitten on the Keys – act and perform their own routines beautifully in a thoughtful, bittersweet film, which has attracted the attention of the world press at Cannes and across the world. They are currently enjoying a sell-out run in Paris.

Mimi’s performance in Tournée is both memorable and intriguing, but when it was her turn to take to the stage, with a blast of Shivas Regal, the acting ends – it’s the beautiful burlesque bad girl we all know and love…

(Click here to watch a little interview with Mimi about Tournée, with a couple of mischievous cameos!) 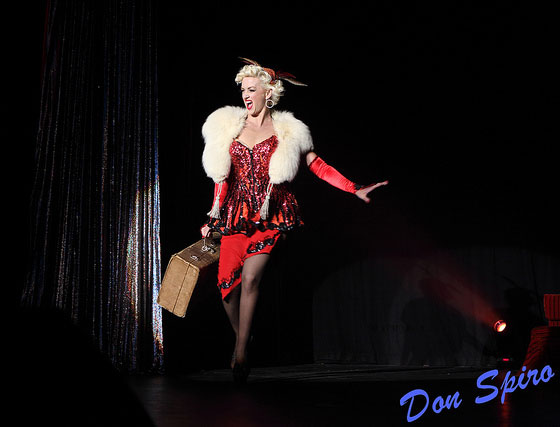 At No, 15, it’s the iconic Kitten de Ville. Kitten is one of our most recognisable burlesque stars; a towering modern-day Monroe who continues to thrill audiences with her signature shimmy worldwide…

In 2010, Kitten co-created a very special homage to Dixie Evans’ legendary Casting Couch routine. At Viva Las Vegas 13, Dixie introduced the performance herself and described the conception of the original act. (Click here for the full introduction and performance…) Kitten performed the homage again at BHoF and the New York Burlesque Festival. Kitten was warmly received in Europe as well – appearing at the Paris Burlesque Festival, and a succession of shows and classes across the UK. 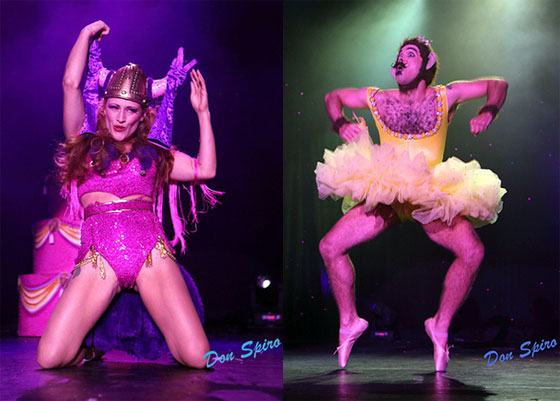 Officially proclaimed ‘Best Burlesque Couple’ at the NYBF Golden Pastie Awards; your beloved ‘award-winning acrobatic burlesque superduo’ have made your Top 20 once again.

As always, their 2010 solo performances were just as brilliant as their duets. We were thrilled when Monkey was crowned Reigning King of Burlesque – hell, he deserved it for the pointe work alone!   Trixie’s BHoF routine was typically charming and somewhat ridiculous – a feisty pink viking atop a giant cake!

Trixie also has a wonderful new website – The Burlesque Innovation Guild, which ‘exists to honor the pioneering artists in neo-burlesque whose innovative, inventive, surprising, clever, weird, ambitious and ridiculous creativity is the future of our art.’

We couldn’t possibly love or respect this power couple any more than we already do. You obviously agree! 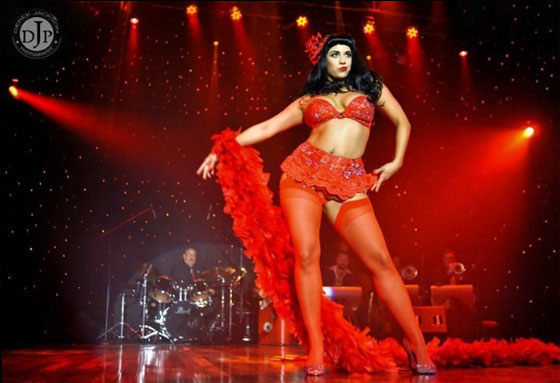 “She knows how to work the crowd over, pulling them in with a crook of a finger, a flick of the hips and pausing to give them a look that says, ‘You want to see more? Beg for it.’ And beg they did…”

Our Editor-in-Chief has spent most of 2010 raving about Coco, without apology. Whatever IT is, she has IT. Lots of IT. IT positively glows from every talented pore.

Coco seems to perform instinctively, with confidence and purpose in every movement and gesture; and maintains an intense relationship with her audience – fixing them with a smouldering stare that would reduce most men (and women) to whimpering puddles, and then rewarding them with a dazzling megawatt smile.

Coco is radiant, poised, smart and effortlessly gorgeous – we feel confident that the greatest burlesque crown of all will be hers in the future… 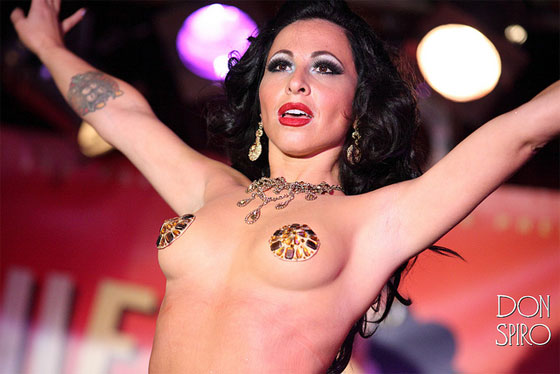 Credited as one of the pioneers of Neo-Burlesque; Angie Pontani has made burlesque her passion and her business.

She enjoys a high-profile career; appearing in a variety of publications and television shows, posing for prominent photographers, and entertaining A-list celebrities. 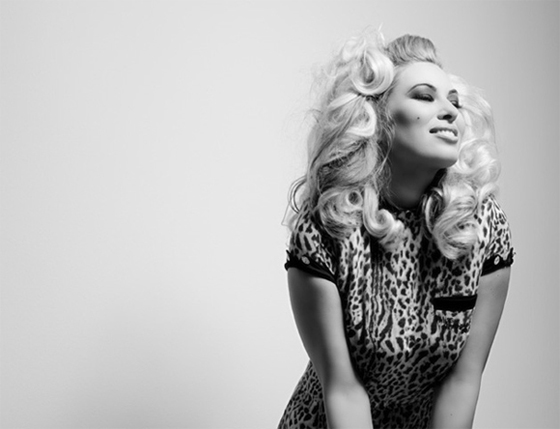 A veritable lioness of burlesque at No. 11. Immodesty continues to create glittering spectacle of the highest standard, and act as a poised and articulate ambassador for burlesque worldwide.

She has done a number of things in 2010 that we are not only impressed by, but eternally  thankful for. In a year when some would argue that burlesque history and high standards needed to be explained, upheld and encouraged more than ever before, Immodesty gave us a wonderful documentary film, Burlesque Undressed.

It was something that so many of us had been waiting for – a film that  introduced the history and evolution of burlesque as we know it, with footage and commentary from some of the best in the business, both current and legendary. A film that gave some insight into how some of the most opulent and iconic acts are planned, assembled and executed. If nothing else, it was an excuse to indulge in some of the best loved contemporary routines – Catherine in her glass; Kalani as a Geisha and a glittering Egyptian queen; Immodesty’s rocking horse and glittering telephone; Michelle’s breathtaking fan dance. All captured in one entertaining, accessible and informative film, which has been screened in over thirty countries. Bravo.

Immodesty has also published her second novel, Ambition; dazzled the afterparty-goers at the UK premiere of the Hollywood movie, Burlesque, and performed actual striptease on a primetime UK TV show, with Catherine D’Lish and Dirty Martini also making an appearance. That’s progress, people. Serious progress. And we were thrilled to be there to see it.

Immodesty is currently on her way to Australia to kick off 2011, and we can’t wait to see what else she gets up to this year!

Click here to read our in-depth 2010 interview with Immodesty…

So, just the final TOP 10 to come! In the meantime, we invite you to browse 21st Century Burlesque Magazine, or join our Top 50 Facebook Page…

Comments can be left below…