Over the last few months my burlesque focus has shifted toward movement and on-stage imagery. I’ve become preoccupied with thinking about how I link my movements together on stage; how I can present near-static moments with elegance and power; how to add grace to elements that teeter dangerously on the edge of ‘stripper repertoire’. In seeking to develop these aspects of my own performance, I’ve been paying close attention to the performances of others, analysising their successes and weaknesses.

As I’ve been doing so, a particular trend within current performances has been drawn to my attention; prioritising ‘the tease’ over ‘the strip’ in acts that involve peeling off layers of dress.

By way of a foreword, I wish to acknowledge that contemporary burlesque offers a welcoming home to performers who encorporate stripping into their acts as a mechanism for character work, or as a social commentary. In these instances, the act of removing clothing in-and-of itself can drive an act forwards. This article sidelines these styles in order to focus on the rising trend for raunchier acts that focus upon the spectacle of costuming/set and the execution of striptease (timing, movement, emotion etc.).

I’m directing my attention toward burlesques that focus on bump-and-grind movements, stripteases with a self-conscious eroticism and acts that serve simply to be ‘beautiful’ on stage.

I’ll insert a disclaimer here and state that I’m aware that these kinds of burlesques do, to some degree, raise questions as to whether they ‘ought’ to be labelled burlesques, or whether alternative nouns such as ‘striptease’, ‘American burlesque’, ‘performance art’ etc. are more appropriate for this style. For the sake of simplicity I will refer to them as ‘burlesque’ throughout this article.

For me, if something is being performed under the banner of ‘burlesque’ it is, to some degree, of that nature. After all, burlesque has had an identity crisis ever since the 1890s – I recently read in Robert C. Allen’s book Horrible Prettiness that several years after British burlesque performer Lydia Thompson’s (one of modern burlesque’s godmothers) arrival in America (1868), she stated that the content of shows currently being staged under the title ‘burlesque’ was barely recognisable as the ‘burlesque’ she had performed with her co-stars (see page 30).

Back to the case in point. I’ve noticed that these strip-central (as opposed to character-, humour-, dance- or aesthetic-spectacle- central) burlesque acts often appear to base their striptease around the removal of clothing, rather than upon what the given removal in turn reveals. This isn’t to say that the revealation is more important than the removal, but rather that I feel the removal is sometimes given too much priority. With the revealation of naked flesh forming the end-point of an act, I struggle to see how an act centered around this end point can justify excluding the suggestion of naked flesh in the run-up to this finale. Surely a striptease act’s high-point should be the powerful and suggestive finale – in terms of its emotion, visual impact and the hints toward this end point that have been inserted within an act’s fomula. Personally, I feel that too many performers fail to embrace the power of the grand finale, and instead they create episodic acts with multiple interest points (i.e. glove peels and corset removals) whilst neglecting to give due attention to rounding an act off with a suitable finale. 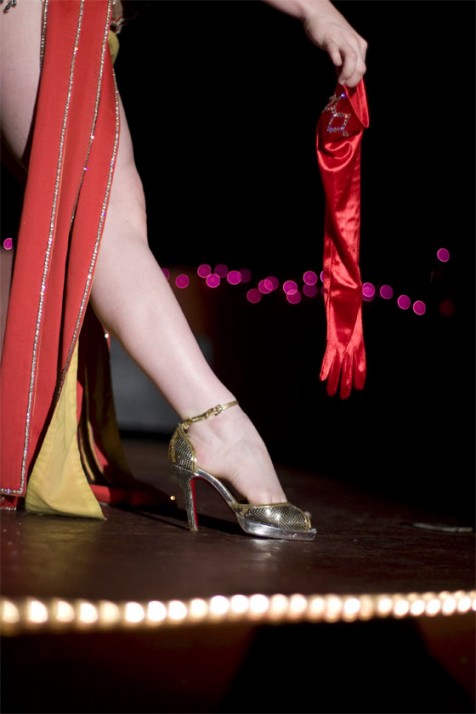 I think some performers are adding a hyphen to the term striptease, turning it into strip-tease. Perhaps this is owing to the way by which some teachers are instructing burlesque classes.

Perhaps it’s because there’s a fear of burlesque running too close to the full-nude striptease we see in gentlemen’s clubs. Perhaps it’s a way of watering down the dangerous eroticism of the nearly-naked body, making it safer and more playful for those new performers who love the aesthetic of burlesque, but aren’t so enthusiastic about being unclothed in front of an audience.

Whatever the driving force, I’m noticing that there’s a distinct trend for performers to separate the strip from the tease, adding emphasis to the ‘tease’ element, whilst practically parenthesising the strip.

“The ultimate point of this article is a question: Why are you stripping in your burlesque numbers? If you’re performing a ‘standard’ striptease, what is the purpose of you taking your clothes off and revealing your naked flesh … why have you chosen striptease as your performance medium of choice in the first place?”

I frequently see acts follow this familiar sequence: Present clothed body part, peel back the concealing clothing veil, reveal the flesh of the exposed body part… and then POW! – the performer moves on to presenting the next, clothed, body part. It’s as though the visibility of flesh triggers an amnesia and the performer forgets why she/he was drawing attention to her/his arm, leg, bust, whatever, in the first place.

It’s almost like the performer is presenting and performing the costume rather than her/his own body.

Where’s the focus? If the focus is the tease of playing with the veiled body, then what’s the point of removing any clothing at all?

Shouldn’t the body wearing the clothing be equally as, if not more, important as the layer of clothing being displayed?

There are lots of techniques one can employ for ‘finishing’ a striptease segment after the clothing removal, and whilst I could provide a list here, I’d be giving away the few years experience I’ve managed to clock up. Instead I’d prefer to ask questions…

How does peeling off your clothing make both you and your on-stage persona/character feel? If YOU don’t feel comfortable, yet you’re hoping to ooze sexual charisma in to the audience, the chances are that the audience will feel your lack of confidence and will cringe at your attempt to glamour them. Burlesque striptease isn’t just about wearing pretty clothes, it’s about taking them off, too.

Paco Fish: On Innovation and Community.

Following on from the above question, how do you feel about the body part you’ve just revealed to the audience? How does having this particular body part on show transform your mood? How is this mood conveyed through body language?

As I recently said to a fellow performer, I believe that taking off layers of clothes isn’t so much about displaying the visual aspect of what lies underneath it (be that a stunning set of lingerie, or a tight pair of thighs), but it’s about what this newly revealed display triggers or symbolises. The character or on-stage persona must develop simultaneously with the levels of nudity within the act.

The ultimate point of this article is a question: Why are you stripping in your burlesque numbers? If you’re performing a ‘standard’ striptease, what is the purpose of you taking your clothes off and revealing your naked flesh?

Of course, for an act to qualify as a striptease it needs to contain both stripping and teasing, but why have you chosen striptease as your performance medium of choice in the first place? Why do you choose to reveal this much of your body when you could perform a sexy dance number in a ‘Hollywood glamour’ gown, or wear many ‘Hollwood glamour’ gowns in a quick change number? Why do you show your body at the end of your act?

The simple answer ‘because this is what a striptease act requires’ is not good enough: How did striptease, with this level of nudity, evolve? What role does the ‘naked’ body play within a successful striptease? What mechanism does the ‘naked’ body provide? This shouldn’t be a simple question to answer – for me it requires a bare minimum of one paragraph. Think about it. Perhaps it will transform your repertoire…

Want to respond to this article? Why not leave a comment below…

BVB: Stepping Out of the Full-Time Performance Pressure Cooker

BVB: An Interview with Kiki Kaboom