‘Frederick Wiseman spent ten weeks with his camera exploring one of the most mythic places dedicated to women: The Crazy Horse. Over the years this legendary Parisian cabaret club, founded in 1951 by Alain Bernardin, has become the Parisian nightlife ‘must’ for any visitors, ranking alongside the Eiffel Tower and the Louvre.’

As a long time fan of Crazy Horse, I couldn’t wait to receive a copy of this film. In my mid teens I came across a French postcard of the Crazy girls: the iconic trademark wigs, smiles and physique, and it has been an enduring love affair ever since. I have seen the show several times, both in Paris and Las Vegas, and it is yet to lose its appeal. Dita von Teese’ collaborations with Crazy Horse were of particular interest to the burlesque community, and I know that many performers and fans discovered Crazy because of that. I hope that many more of you will be intrigued and interested by this film, and make the journey to see the show as a result. ‘The art of the tease’ is certainly appreciated and practiced; the dancers may be nude, but they are constantly concealing and revealing, and are clothed and unclothed by exquisite layers of light, shadow and reflection.

“When I’m in a rehearsal, I sometimes think: ‘Not only do I attend a real rehearsal, but we’re directing it!’  I have to pinch myself to make sure I belong to this place of ultimate refinement, beauty and desire…”
Ali Mahdavi – Artistic Director

Frederick Wiseman’s film examines and covers every aspect of the company – the dancers, the directors, the commercial considerations and merchandise, backstage rituals, front of house, partnerships and rivalries. No one is directly interviewed or questioned, but the viewer is permitted to eavesdrop and look on throughout rehearsals, fittings and production meetings, as celebrated director and choreographer, Philippe Decouflé creates and brings together a new show – Désirs.

It quickly becomes clear that everything and everyone operates within a set of rules and routines, a number of which Decouflé finds frustrating. “It’s creation and you can’t control everything…It’s about art!” He exclaims in a tense production meeting. The creative process, however, is also an intense, meticulous and relentless one. The dancers rehearse all day, and then perform twice a night, (three times a night on weekends.)

At times the nudity and eroticism is utterly forgotten in the gruelling rehearsals; there is an exact creative science to everything, and it is fascinating to observe the precise placement of every light, shadow and limb – an inch out of place and the final beautiful product that we enjoy on stage, that is so sensual and visually delicious, cannot be achieved. In short, it takes a hell of a lot of hard work, long hours and almost neurotic perfectionism to create something that seems so effortless and sexy. I am sure many of us in the burlesque community can appreciate this, but Crazy takes it to an awe-inspiringly impressive level.

The costume is equally considered and precise, and stylist, Fifi Chachnil comes across as a likeable, earnest and dedicated professional. We get a definite sense of Decouflé’s personality too – passionate, gifted, and poetic, but constantly in a frustrating battle of ‘art’ versus business; not a stereotypical, popular notion of a lecherous, bellowing dictator. Indeed, everyone appears to be courteous, restrained and polite to one another, even when in conflict. The artistic director, Ali Mahdavi’s passion and emotional and personal investment in the show is obvious, and it was pleasant to feel my own passion for Crazy reflected back at me from one of its true super fans.

I loved all the sections that featured the dancers. Anyone expecting to see vacuous, oversexed airheads who simply sashay up and down will quickly realise their mistake. The girls appear grounded, thoughtful, disciplined and mindblowingly agile; they meet the strenuous demands of their job with humour and dedication. It is also interesting and pleasing to see them treated with respect and equality by Decouflé and other members of the team. He engages and involves them in open, frank conversation, and Fifi Chachnil takes the time to explain her changes and decisions to a dancer during a fitting.

We need to see the final product – the result of all the meetings and rehearsals; the show that inspired Decouflé and Mahdavi to invest so much time and passion into it, and Wiseman shows us this. He dedicates a lot of the film to actual performance footage, showing some of the acts in full, and I am so glad he chose to do this, especially for the benefit of people who are not familiar with the show, or are discovering it for the first time by watching this film.  The rich, beautiful colours and patterns, the sensual manipulation of limbs, buttocks and arched backs, and the original soundtrack, seduce us and bring the film to life.

He includes a variety of acts: the more frivolous and cheesy numbers such as ‘Baby Buns’ and the Désir finale; the dreamy, surreal, ‘Evolution’, and ‘Venus’; the arousing ‘Teasing’; and the moving and tortured ‘Final Fantasy’ and ‘Rougir de Désir’ (the act with the ‘white gloves’ – one of my favourites from the newer acts.)  I think the selection will give newcomers a sense of the variety of mood, aesthetic and techniques, although one need look no further than the iconic, ‘God Save Our Bareskin’ for a perfect illustration of the disciplined, perfectly synchronised, identical Crazy Horse chorus line (‘Soldiers of the Erotic Army’, as the finale song describes them.)

Any small criticisms that could be made may come down to personal preference. For instance, those with no prior knowledge or experience of Crazy Horse, and that don’t want to have to work too hard when they watch a documentary, may find the lack of introduction, narration and name captions etc. frustrating or confusing at times. Personally, I found myself longing for more direct interviews or accounts. I wanted to hear more from the girls; their thoughts, backgrounds and experiences, and similar information about Decouflé, Mahdavi and Chachnil (although we get a sense of Mahdavi’s interests and philosophy from the press interviews that Wiseman records.)  However, Wiseman clearly has a very particular, subtle and deliberate style and approach, which he talks about in detail in interviews, and it is very effective if you are willing to just take in what you see and build an impression of Crazy Horse in your mind based on that.

He doesn’t analyse or pry too closely, or try to force responses; he appears to simply observe and record what and who he sees and what they say, and then edits all the material into a final snapshot or glimpse into this fascinating world. We do receive some information without having it directly explained to us. For example, showing the audience photos being printed out, ready to be sold, gives us an impression of the variety of different people that come to see the show and find it appealing – images of older and younger couples, groups of male and female friends, individuals, tourists, affluent patrons.

I also felt that some of the close up filming of certain acts was a little too prolonged; I found myself wanting the camera to pan back out so that I could see the overall visual effect and choreography, but again, this is just personal preference.

The film is well worth seeing, and I will definitely purchase the film on DVD when it becomes available, to add to my collection of Crazy Horse footage (I will shortly receive more information about DVD release, which I will share with you.) It is an intriguing world to explore, and every aspect of it is considered at some point in the film. There is much that many of us, as performers, can appreciate and find familiar, and much more that is unique to Crazy Horse that we can admire and take interest in. If you are discovering Crazy for the first time, it provides an intimate introduction to a fascinating world, and for those of us who are already fans, it allows us to explore and discover even more, from new angles and perspectives, and remind ourselves why we love it.

The film is still being screened at a number of upcoming locations, which I have listed below. I will update the list as I am made aware of new screenings and locations.

If you have seen the film, please feel free to leave your impressions and comments below – I would love to hear what other people thought of it… 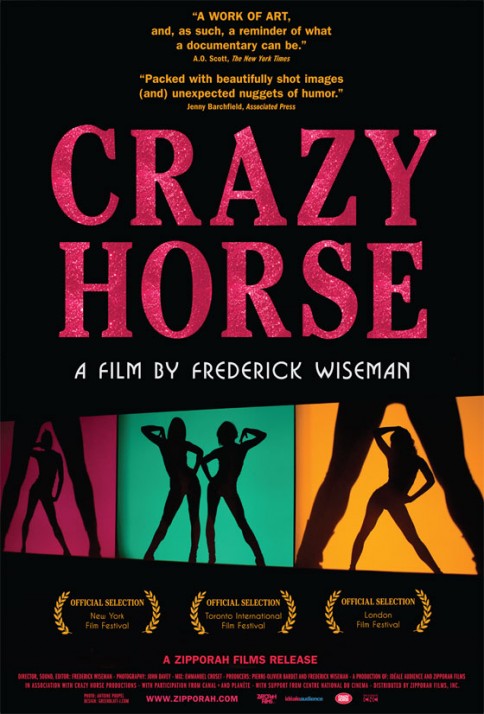