Dita is literally everywhere at the moment. On stages all over the world, on film, on screen, on menus, even on bottles! There are cocktails and desserts named after her, an interactive virtual mansion inhabited by her, and now a private club is about to spring up in Paris for a month, filled from ceiling to floor with everything ‘Dita’. I have always loved and admired her scrupulous attention to detail, and judging by her description, Cointreau Privé will be no exception.

Dita shared some of her thoughts in the lead up to her spectacular show in New Orleans last month, and you can now enjoy the rest of our conversation below…

Have you had an enjoyable and productive 2010 so far? Does Paris continue to enchant you?

Yes, in fact this year has been one of my best years so far. I do love spending half my time in Paris – it’s a new challenge for me, learning the language and getting accustomed to all the differences of living here rather than just visiting. And although I love being in Paris, it also helps me to appreciate things about America too.

Paris is a lovely, glamorous place to be, and I love so many things about it, but I do get excited about getting back to Los Angeles too – eating healthier foods, having lots of great different places to exercise, driving my vintage cars, the great weather, and convenience at any hour, any day of the week! I would give anything for a Whole Foods market open seven days a week here in Paris! We are so spoiled in LA for that sort of thing, convenience. I dread when something that needs professional attention happens on a weekend in Paris. Locked out of your apartment? Need a plumber? Good luck!

I have read about Cointreau Privé (your exclusive members bar opening this week) with great interest. Ali Mahdavi’s promotional images are exquisite! As the artistic director, can you describe the creative process, and what the lounge will offer to its members?

Ali and I are very close friends, and he and I work very well together – we have the same ideas about how things should be styled and look, so it’s always a treat to work with him, and easy. He’s become my official Cointreau photographer!

The Cointreau Privé will open September 28th, 2010 and it is private yet accessible. You can obtain membership on Cointreau’s website, and you will get a bracelet that gives you access.

The space is amazing, a beautiful little hotel in Montmartre, and I am decorating it with similarities to my own home, and with lots of personal touches. You can see some of my most elaborate costumes up close, and order my cocktail, the Cointreauteese, enjoy the Cointreau desserts the famous Parisian cafe Angelina created for me, as well as have dinner, with every item on the menu chosen by me.

It will be a sexy, romantic, unique place, and I will be there often too, so there’s a good chance we will meet there if you’re a member! The club is only open throughout October.

Behind the Scenes footage of Dita creating her fabulous Cointreau ‘Webisodes’. Click here to watch them all…

Is it to be a deliberately exclusive experience, or do you hope to re-open it for short periods in the future?

It’s just for the month of October, but I do believe Cointreau is open to opening other ‘Cointreau Privés’ in other cities…

I LOVE the new Perrier interactive website. Was it entirely your concept? Did you have fun shooting the footage on location in Latvia?

It was entirely Perrier’s concept, actually. I was surprised at how racy they wanted to go with the campaign. We shot on location in the Latvian countryside at this fabulous castle, it was so amazing that it was filmed authentically rather than done on green-screen and done digitally. It was a great experience, but very difficult, long hours, but people seem to like it, so I am happy.

In recent press, you have been credited with ‘making water sexy’! Do you think 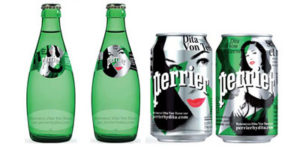 it’s important that people can interact with a brand or product – that it engages their senses?

Well, water IS a big element in my shows – my most famous shows usually end up with me bathing, showering, so yes, water can be sexy… But anyway, the name of the game in advertising is to catch people’s attention, and of course it’s no news that sensuality is very successful in advertising, [but] I’m always shocked when the really mainstream corporate companies take a chance and use me to endorse their product. Another reason I love France! France has been very good to me, I feel like it’s the country that has embraced me the most, and understands what I do.

From reading some of your press comments describing your dreams of becoming a ‘Perrier Pinup’, it is obvious how special this collaboration is to you…

Well, it’s quite something to walk by every cafe in Paris and see that famous little green bottle with my image on it. It’s quite surreal – slightly embarrassing, actually. The first time I saw the bottle, I was at a cafe and was told by my management that it wasn’t out for another month, and then suddenly, the waiter put the brand new bottle down in front of me, and it was the first time I had seen it.

Footage of your recent appearance at Jean Paul Gaultier’s Couture Week show has been circulated around the world. Do you still enjoy opportunities to take to the runway – is it simply another type of performance to you, or can it feel daunting?

Well, I definitely feel it’s daunting, but it is an experience I wouldn’t miss, especially when it’s Jean Paul asking me to do it! I have no intention of appearing on other runways; I’ve walked for Moschino, which is another brand I love, and they did a collection inspired by me. I’ve done Jean Paul Gaultier’s haute couture show twice now. I don’t feel like there’s a runway to walk on beyond that really – it’s the height of glamour to be there at the Haute Couture in Paris!

But it is very stressful at these shows; lots of 2am corset fittings, and there were seven pairs of hands on me sewing five minutes before I had to go on. I had no idea what I was doing up there, I had never even seen the dress before! So, yes, I prefer the careful planning of my own shows, but that nervous, ‘What’s going to happen?’ feeling is great too, especially when it works out in the end!

Can you share any details of your upcoming plans or projects in 2010, or beyond?

I am currently in the process of creating a large scale production, so that’s my next big move. A lavish spectacle that will tour all over Europe and America. It’s a long process; this is a major show that for me is the climax of my stage career…

And that seems like an exciting note to end on!

Click here for more information about Cointreau Prive in English, and if you would like to see more of Ali Mahdavi’s beautiful images for Cointreau, many can be seen on this page…

Play with Dita in her Perrier Mansion…

Dita is performing at Erotica in London during November. Click here for more information…

For exclusive footage, images and communication from Dita unavailable anywhere else, become a member of Dita’s official website…

Dita Von Teese Reborn in The Art of the Teese

Together We Can-Can: Life as a Moulin Rouge Showgirl