This week, I spoke to Dita about her recent and upcoming plans in ‘La Ville-Lumière’ – a city forever close to her heart… 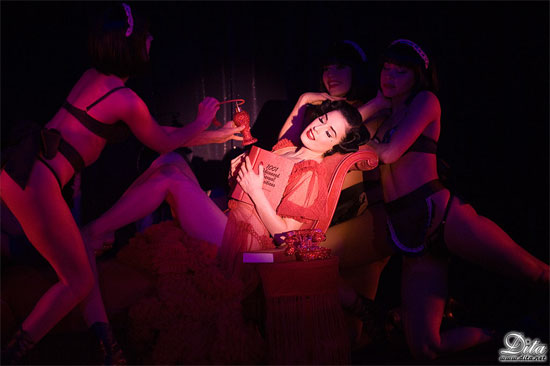 You have recently wrapped up all of the performance and recording at The Crazy Horse, and soon you will be back in Paris for The Gentry de Paris Grande Revue. You have spoken frequently of your love of Paris – what does it mean to you to be returning here shortly to perform once more – does it make your performances here all the more special and enjoyable for you?

Well, first of all, I just LOVE the city. You have to remember that I’m from a small town in Michigan, so to be living out a far-fetched dream like becoming a showgirl in Paris, well, for me that’s pretty amazing! And I have lots of friends there, and it’s a magical place for me where I feel I can be the woman I always wanted to be.

I feel comfortable being eccentric there, which is fun for me – and somehow, there is a different respect for showgirls there. People actually KNOW what it is that I do; they get past the red carpet pictures, and celebrity as a ‘thing’. They realize that I create fantasy and illusion and they appreciate the art of glamour. In America, I still see people asking, ‘what does she do besides wear red lipstick and old clothes?’

I think that the phenomenon of celebrities that don’t actually DO anything creative is so prevalent, I sometimes feel I’m lumped into that category because it’s so rare for anyone to see footage of me on TV since it’s kind of too risque still for many networks; so people know me, they see me, but they might not actually get to see what I DO.

I don’t have a big team that produces my shows, I don’t have a ‘glam squad’ – every show I do is my own labour of love and my own creation. I think people are so accustomed to stars depending on their big team to create their art for them, and I’m trying to get the message across that it doesn’t always take that. I think that it takes ambition, drive, hard work, and the desire to create, and that’s when it becomes something magical.

It’s easy to hire a team and make a show, or a music video, or sit in a chair to be made up for the red carpet. But it always stays on the surface somehow, and you don’t see the personal investment. It’s important for me to do it myself as much as I can. Us burlesque dancers know this. This is what burlesque was always about – making your way, finding yourself, being unique.

When it was proposed that you become a part of the Gentry de Paris Grande Revue, surely there was no hesitation – this venue, the history, the very rooms and boards that the likes of Baker and Mistinguett inhabited and performed on…?

Well, I did in fact have some hesitation because I have a very close relationship with The Crazy Horse Paris, and I’ve worked very hard to bring attention to that show because I love the history of the place, I love the girls, and I love performing there. But when I thought about it more, I realized that performing in Gentry’s revue was a great opportunity for me to show the kind of shows I typically do, which are quite different, with all my big sets that don’t fit on the intimate Crazy Horse stage.

For me it’s like the difference between acting in a film, where the audience sees every little gesture at an intimate venue like the Crazy, and then the Casino de Paris is more typical of what one would see at my own shows or at a 1940’s American burlesque or Follies revue, with the large stage that allows for the exaggerated ‘burlesque strut’ – so I’m bringing my brand new act, the Opium Den, which is my biggest and most elaborate set, to debut at Gentry’s show at the historic Casino de Paris. I’m excited for my European fans to see another side of what I do, because the numbers I made for the Crazy Horse were all specifically created for that smaller venue. And of course, I’m excited to be on the Casino de Paris stage like all those great stars!

What are your thoughts and anticipations/expectations leading up to this production?
I have no idea what to expect! I’ve heard a lot about the plans for the production, and I’m looking forward to seeing how it all comes together. I just debuted my Opium Den act to sold out shows in Hollywood, and it was unanimous that it’s my best act, so I’m really excited to have people see it.

Do you enjoy or like the idea of performing your acts within a more seamless, contextualised production, as opposed to performing them individually and in abstract at a more conventional burlesque show or event?

I like it when I know that the entire show has high production value and that people are enjoying the other acts. I only get anxiety when I’m scared that the audience is being tortured by amateur or boring acts. I like the show to be strong, and I like going up when I know the show runs smoothly and everyone is loving every second of it!

One of my least favorite shows I ever did was a show I did in London at Koko where they didn’t really have any support talent for me. My shows are between 9-12 minutes long each and I need time for costume and set changes, and so it’s important that the audience is being entertained between my acts! There’s nothing better than following a great performer that gets the audience worked up and in a great mood! I would love to do a full revue in London again, with lots of fabulous support acts!

Paris seems like THE place for this show to take place and belong – can you imagine other revues of this kind taking place elsewhere in the future?

Of course! I just did a big revue of my own in hollywood, and it was a big success, and I’m thinking of putting together a touring show like that, scouting great support acts, and then eventually doing the really big budget revue, designing the show from the ground up, and taking it around the world. I have several different plans for full scale revues I want to do, it’s just been a matter of taking the time out to do it. I keep getting slightly afraid of going on a real tour – I like variety and I am proposed lots of regular shows, but I’m not sure that I want to do the same show every night for six months, or a year… I have a pretty great thing going right now where I get to change things up, and work with different performers all the time.

We are all so excited to attend the European debut of The Opium Den – the brief glimpses I have seen so far are just tantalisingly fabulous! What can we expect from this new number – is it something we have never seen from you before, or does it still bear that classic Dita signature?

For me, it’s my pinnacle. It’s my most opulent and sophisticated show. It’s been in production longer than any other act I’ve ever made, and definitely the most expensive act I’ve ever made. My accountant came to see the debut because he needed to know how the hell it could cost that much!

I think that the costume is the most beautiful work Catherine D’Lish has ever done for me, and so I’m excited for people to see it. It’s been sitting in a box for almost four years, waiting…
The day after this show’s debut last week, people were texting me wondering what the costume was made of, that it couldn’t possibly be Swarovski, that it has some kind of other-worldly brilliance that goes beyond any other Swarovski costumes I have, and that’s because it’s this very special kind of Swarovski special effects crystal. Hundreds of thousands of them, slinking across the stage! Catherine is an amazing artist and talent. My accessories to the costume were made by a fantastic designer named Michael Schmidt. He did this headpiece and this Swarovski fan that is amazing, and he made the G-strings, the pasties, and all my hand props.

The actual opium set is stunning. It’s so completely beyond all my other numbers, it makes my other props seem a little silly! Someone that works for me walked in during the first rehearsals when it was set up and all lit, and she dropped all of her things she was carrying and stood there stunned, mouth open, so the effect was achieved!

And the music is so cool, it makes me so happy to hear it, and everyone notices it and adores it. I always have my own music recorded for every show now, and it was a special kind of challenge to get the sound and feel right for this show. So for me, when it finally all comes together there onstage, and all the obstacles have been overcome, and the show is a complete joy for me to perform, I feel SO fantastic!

It’s rare that it feels right in the beginning… it’s hard to make a new act and ‘click’ with it right away. For me, this show is ‘love at first strip’, and I love doing it! And I know I could skate by and keep doing the same numbers and I could probably spend my money on something more sensible… but I’m sort of reaching this moment where I don’t know how much longer people will want to see me naked up there before it’s time for me to bow out, so I wanted to ‘one-up’ myself and know that I went full-on.

We know you will be performing a larger version of your classic Cointreau ‘Glass’ show, and the new Opium Den act, but what else can we expect – can you give us any clue as to what you have in store for us?

It’s hard for me to know what the show on a whole will be like until I arrive in Paris in September and see rehearsals, because the show is Gentry’s creation, I’m just a guest star doing my own numbers. I’m just totally focused on giving it my best in my two acts every single night!

Come to Paris, as if you need another reason! See the beauty of the city, see a fabulous show, have an adventure!

Click hereto find out about the upcoming spectacular – The Gentry de Paris Revue, with details of an EXCLUSIVE COMPETITON!

Dita Von Teese Reborn in The Art of the Teese

Together We Can-Can: Life as a Moulin Rouge Showgirl