Burlesque in New York: A Brief Overview of Our Scene 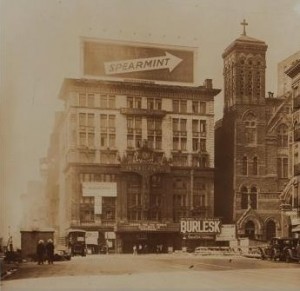 If you’re looking for a burlesque vacation, you can come to New York and know that every night you’ll be able to get your fix!

Burlesque was made popular in New York by Lydia Thompson and her British Blondes in the 19th century, but Americans developed their own style of burlesque rapidly over the next few decades. It’s entirely possible that Lydia Thompson wouldn’t have recognized Minsky’s shows as burlesque – which is not to say she wouldn’t have appreciated them!

Neo-Burlesque in New York has a lineage somewhat separate from the development of burlesque into strip joints, which evolved over the last few decades of the 20th century. Neo-burlesque in New York seems to have evolved primarily from New York’s theater, modern dance, performance art, neo-circus, and drag culture, and only partly from the tiki, swing, and rockabilly scenes that seem to have had a larger influence in other cities.

In the 1990s, burlesque shows became popular at Coney Island’s Sideshows by the Seashore in a program developed by Dick Zigun, who still heads Coney Island USA, which is also responsible for the legendary Mermaid Parade. Penny Arcade brought professional pole dancers and strippers into her influential show Bitch! Dyke! Faghag! Whore! Neo-Burlesque was also making appearances in Manhattan in shows such as Dutch Weisman’s, featuring Billie Madley, Ami Goodheart, and Angie Pontani as showgirls.

These shows were almost immediately followed by The Blue Angel, created by Ute Hannah, which later split into current shows Le Scandal, headed by Bonnie Dunn, and Badass Burlesque, headed by Velocity Chyalld; The Red Vixen, created by Selina Vixen and featuring Julie Atlas Muz and Tigger; and The VaVaVoom Room, created by Kate Valentine, who also performed with The Velvet Hammer in Los Angeles. New Yorkers World Famous *BOB*, Dirty Martini, Tigger, Julie Atlas Muz, and the Pontani Sisters traveled to New Orleans for Tease-O-Rama in 2001 and to Los Angeles for Tease-O-Rama II in 2002.

Because so many New Yorkers made the pilgrimage west to Exotic World when it was on a goat farm in the desert, often traveling together to help Dixie Evans and Charlie Arroyo keep the place in working order, they became a strong force in the development of the pageant and the museum, and there met performers from around the world who were also interested in the history of burlesque and the continuation of the art. They were thrilled to find sister burlesque scenes in cities such as Los Angeles, Seattle, New Orleans, and San Francisco, as well as in other countries. Eventually, New Yorkers Luke Littell and Laura Herbert helped Dixie move to Las Vegas, seeking greater recognition for the Burlesque Hall of Fame and improvement in Dixie’s health.

The city has developed its scene not just from a desire to tribute classic burlesque, but because a recognition of the burlesque stripteaser as an iconic figure and as a cultural force to be reckoned with has been part of fetish, drag, and other underground performance scenes for decades.

In many cases, early on, performers had many kinds of numbers, some of which just happened to be burlesque numbers. At The Va Va Voom Room, Coney Island, and The Blue Angel, variety acts were performed between the stripteasers; but stripteasers were always essential to the format of the shows.

Now New York has an enormous burlesque scene, although it is concentrated mostly in downtown Manhattan and in Brooklyn. Many weeks there are burlesque shows every night. The Slipper Room, which has been presenting burlesque show for ten years, hosts burlesque shows at least four nights a week.

In addition to one-offs, there is Monday Night Burlesque at Public Assembly, the space formerly known as Galapagos, which has been running burlesque shows for several years; burlesque shows Wednesday through Saturday every week at The Slipper Room, which has been running them for ten years; This is Burlesque, featuring Angie Pontani and Murray Hill, every Friday and Saturday, recently finished their run at Corio and will be in a new venue soon; Thursday and Friday night burlesque continues at Coney Island during the season; there is Le Scandal every Saturday; and numerous monthly shows that keep New York’s striptease card full to bursting, such as Wassbassco, Pinchbottom, and Badass.

New York also has an amazing number of musicians who work specifically in burlesque shows, including Brian Fisherman, The Red Hook Ramblers, and Ronnie Magri, a native New Yorker who helped develop the Shim Sham Club in New Orleans in the 1990’s.

We also have a community developing as a result of people who meet each other in classes and go on to develop their own projects. I run the New York School of Burlesque out of the Slipper Room and run two to six classes a week, with many former students regularly performing and running their own shows.

Some former students include Clams Casino, co-producer of special event shows like The Costello Show: A Tribute to the Other Elvis; Gigi LaFemme, who produces Revealed; Gal Friday, now a teacher at NYSB, who co-produces Skin and Skullduggery with Albert Cadabra; Darlinda Just Darlinda, also a teacher at NYSB and a show producer; and Veronica Varlow, a performer who tours with Emilie Autumn, was featured as the coach on an episode of MTV’s MADE, and teaches when she’s in town.

And just to ice the cupcake of New York Burlesque, Angie Pontani and Thirsty Girl Productions produce the New York Burlesque Festival every year, celebrating the diverse styles of our scene and welcoming performers from as far away as Japan and Australia…

For more information about what’s going on in New York you can check out my blog at, or view Brooklyn Ed’s NY Burlesque Calendar.