Every time that ringer sounds and the Bareskin soundtrack begins, I still experience a happy tingle of anticipation.

Forever Crazy is a standalone collection of classic and recent numbers from the Crazy Horse Paris show, designed as a tribute to founder Alain Bernardin, and part of the 60th Anniversary celebrations. The show is entertaining London audiences on the South Bank until Sunday 16th December. 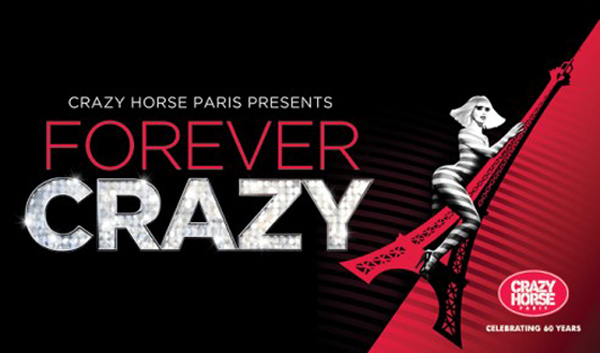 I’m pleased that those in UK who often ask me about Crazy, and are unable to or have yet to see it in Paris, can sample it here. I say ‘sample’ because I believe this to be a sample rather than the full Paris experience, which I still recommend above all.

“It’s evident that a great deal of hard work and enthusiasm has gone into making this happen.”

It’s evident that a great deal of hard work and enthusiasm has gone into making this happen. The staff at the venue deserve a mention; they reflect that energy and were extremely polite and helpful. A lot of effort has clearly been dedicated to making the venue feel as little like a tent and temporary structure as possible. I felt that the decor was almost there; just a little more polish and attention to detail would finish the look.

The show itself contains some classic Bernardin routines, but I think one or two numbers in the overall selection were a little lazy and other choices would have shown off the girls’ abilities more. A segment consisting entirely of walking and posing wastes their talents, in my opinion. I was pleased to see the inclusion of two of my favourite recent routines by Philippe Decouflé: Rougir de désir, which provided a poignant, moody interlude, and the mesmerising Upside Down, which got an enthusiastic round of applause on both my visits.

“Nooka Karamel has such a strong face, presence and sensuality, and Daizy Blu’s charisma, athleticism and intensity … set the standard.”

Some numbers weren’t completely polished and tightly synchronised. Perhaps the newer cast members aren’t fully up to speed; the more established performers definitely stood out and anchored the others. Nooka Karamel has such a strong face, presence and sensuality, and Daizy Blu’s charisma, athleticism and intensity (especially brilliant in Jungle Fever/Chain Gang on my second visit) set the standard. British dancers Taina de Bermudes and Mia Boum Boum were eye-catching and memorable. Taina did an especially good job of Crisis! What Crisis?, tossing her glossy blonde hair and performing a slick striptease. I also have a soft spot for the beautiful Mina Velours, who did a charming job of my all time favourite number, But… I am a Good Girl.

My main concern is what I call ‘consistency of experience’. People attending on different nights can expect a varying standard of experience, mainly dependent on where they sit and the role assignment of the show itself.

Firstly, the seating arrangements. My front table on my second visit was excellent, as you would expect, but my experience of a gold band seat on the first visit, off to one side, was somewhat disappointing. The seats in this block were tightly bound together and you had to view the show between the people in front of you. The tent pillars also obstructed the view of some people, and it was clear that those in the seats to the furthest left or right would not be able to see the whole stage. My friends who sat in the block of seats even further back said they didn’t feel very involved or engaged in the show. The Spiegeltent is beautiful with a special atmosphere, but I really feel that this intimate show with its closed, peepshow stage needs a narrower, equally intimate venue.

“My main concern is what I call ‘consistency of experience’. People attending on different nights can expect a varying standard of experience, mainly dependent on where they sit and the role assignment of the show itself.”

Secondly, the show itself. Based on my two visits and the visits of people I know, the standard of the show varies based on which dancers take the lead in group numbers and perform the solo numbers. By the way, for those who think the decision to give Yafa Yemalla (the cast’s only non-white dancer) the Jungle Fever/Chain Gang solo was racially insensitive or stereotypical, she is only one of the dancers that perform this number. As with all solos, the role rotates. Due to the mix of newer and longer serving cast members, the London show is not at a point where any rotation guarantees the same high energy, first class experience. In fairness, I have experienced the same inconsistency in one or two solos in Paris, with one performer giving a stronger rendition than their alternative, but this show has more to prove.

As I anticipated, there has been a mixed response to this show from first time audience members. Some people just won’t ‘get’ the appeal of this show, and that’s not to say they are lacking in some way, it just won’t be to everyone’s taste.

Some of us fell in love with this show through its iconic imagery years ago and have remained devoted after countless visits. No matter the venue, selection or overall standard, we support it. We know the show inside out; we embrace its combination of frivolity and precision. Some find what they see as a narrow/shallow vision of femininity troubling, and I can understand that point of view, but they need to understand that Crazy is based on the vision of one man, Alain Bernardin, who opened the show in 1951.

“…the regimented perfection, iconic aesthetic, joie de vivre and flawless physiques, all presented with tongue firmly in cheek, are what I enjoy about Crazy. It’s not the only type of performance and beauty I appreciate, but I do appreciate it.”

Like Ziegfeld before him, Bernardin created a show that brought his personal ‘dreams and fascinations’ to life, and chose women that met his strict personal preferences, which are still adhered to today. Therefore, expecting this show to be broadly representative and varied guarantees frustration and disappointment. It doesn’t claim or attempt to portray all facets of womanhood, or the variety of voices and body types we are used to in contemporary burlesque. But the regimented perfection, iconic aesthetic, joie de vivre and flawless physiques, all presented with tongue firmly in cheek, are what I enjoy about Crazy. It’s not the only type of performance and beauty I appreciate, but I do appreciate it.

Mod Carousel Down Under: Final Week of Shows in Melbourne

I have also been asked if I consider Crazy to be a burlesque show, and I don’t. Bernardin was reportedly fascinated by classic American striptease (as well as the American Western movie genre), particularly the legendary Lili St Cyr. But the show he created was not a classic American revue that directly reflected the burlesque of his day. The chosen dancers had lean and precise physiques, not the sensuous hourglass figures of the American burlesque dancers.

“Trying to categorise this show as burlesque or compare it to other burlesque shows denies the unique design and intention of Crazy Horse … Burlesque and Crazy share some characteristics, but I still believe them to be different creatures.”

In comparison to the contemporary burlesque we know, the show continues to be based on the specifications of its male creator and the male directors who have succeeded him, and there is very little actual striptease, developed narrative or extensive interaction, despite the occasional lip synched musical monologues. Trying to categorise this show as burlesque or compare it to other burlesque shows denies the unique design and intention of Crazy Horse. I think people should resist the urge to define and pigeonhole everything they see. Burlesque and Crazy share some characteristics, but I still believe them to be different creatures.

With my observations in mind, I would suggest that if you plan to see the show and have the money to spare, purchase Platinum tickets, or arrive early enough to secure a front row, central Gold seat (see seating plan here.) It’s difficult to really immerse yourself in this show without a close, central view. You miss the intimacy, the little quirks and expressions, the full visual impact and effects. I do recommend enjoying a taste of Crazy Horse in this beautiful Spiegeltent, but where you sit really makes a difference.

For any Kelly Brook fans, Kelly will be featuring in the show from this Thursday (Nov 1st – 8th). I’m personally unsure about this decision, but it’s certainly generated some additional press attention for the show.