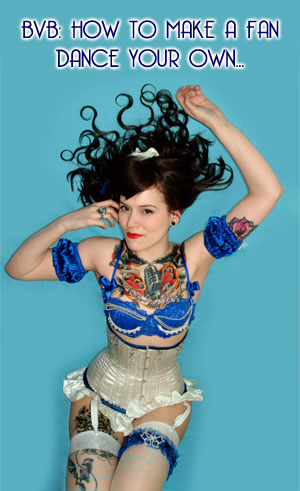 Many performers find that during their burlesque career, they are specifically asked to perform a fan dance. With the proliferation of fan dances on the circuit, it’s common to feel a pressure to make such an act your own by adding your own mark to it. But as often happens, one runs the risk of letting the ‘twist’ upset the balance of the full act.

I’ve seen many acts that, regardless of the technical ability of the performer, fall down owing to a lack of characterisation, repetition of the same fan moves and/or a dependence upon the fans to hold the audience’s attention.

There seem to be four main approaches to the fan dance: Sally Rand tribute, comedy fan dance, striptease plus fan work and finally, one of the former structures with the added dimension of customised fans (i.e. not your average one-colour ostrich feather fans).

Throughout the course of this article, I will outline each style with tips for successfully executing an act in this manner, plus a brief tip-off on the usual pitfalls.

Description: The performer dances nude, save for pasties and panties/merkin. The performer reveals his/her body from behind the fans around 2/3 of the way in to the act. Examples: Michelle L’Amour, Cherry Shakewell, Millie Dollar, Cherry Loco.

The emphasis of the Sally Rand tribute is upon the dancer’s movement and the beauty of the fans. It is, therefore, important to invest in a high-quality pair of feather fans; made from either long, plump ostrich plumes, or voluptuous, floaty ostrich boa. Balding fans will distract from the atmosphere of the act, making it look less professional and less polished. 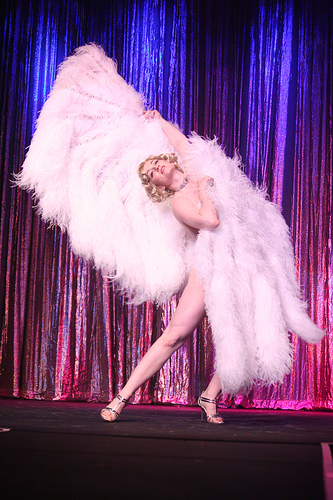 Pacing is very important as one’s movement alone must captivate the audience throughout the duration of the performance. Tight choreography may be beneficial. Movement includes everything from your footwork and posture through to the shapes you create with your fans.

Think of your fanwork as an extension of your bodily movements. Big fan shapes add points of emphasis and small poignant movements (such as rippling shimmys flowing through the feather fronds) can create moments of tension or suspense.

When using your fans it’s useful to think about your use of vertical levels as well as the horizontal.

Besides moving on your feet across the stage, think about including lower-level floor-work and higher-level work with the fans above your head. Use all the space you can.

The reveal is a dramatic turning point within the Sally Rand tribute style. After the reveal has been made, the movements a performer can execute are limitless.

Feeling put under pressure to hold the audience’s attention with limited ‘non-revealing’ movements, it’s a common faux pas for the performer to make the reveal too quickly…

“Save, save, save your reveal. The one mistake I think some newbies make is that [they worry that] the audience gets impatient if they don’t see pasties quick enough. But the audience has seen tons of boobs and they’re as interested in the journey as they are in the destination.”

The soundtrack for such an act is also important. Your soundtrack and movement must compliment one another. You may choose a beautiful instrumental track to accompany a beautiful, graceful dance, or you may choose a more metaphoric route, for example, enacting lyrical content with your dancing. The options extend far beyond these two examples, of course, but a rapport between sound and movement is important.

This is perhaps one of the more difficult fan dance styles to master, as parody is a very subtle ingredient.

Consider why you believe your act is funny – what is it about the performance that will rouse the audience into fits of giggles? Is it that your character is arrogantly performing a shoddy act (i.e. egotistically performing a Sally Rand fan dance with cheap costuming and weak movement)? Is your character the the complete opposite of glamour, and the juxtaposition between your character and the fans is the point of laughter?

When you have grasped the comedic core for your act, you can structure your performance around it. This about your costuming very carefully and how this affects your character. You may communicate emotions such as vanity and frustration with facial expressions and body language. Consider the punctuation points within your act; will it be clear from the start that your act is a parody of the burlesque fan dance, or will this be revealed during the course of the act? How do your punctuation points affect the pacing of the act?

When the comedy reveal has been made (whether from the very start or otherwise), comedy acts tend to require a steady stream of character-based developments. I’ve seen many acts in which the performer opens with a strong, funny moment, but then the rest of the act feels like it’s tagged on behind it. This feeling seems to arise, if the performer neglects to play out the possibilities opened up by the comedy reveal and, instead, goes on to focus upon other elements within their performance. As I state above, the comedic ‘core’ ought to be in mind throughout the act.

The glamourous addition to a striptease routine…

Description: The performer strips down to their underwear and then picks up their fans to dance. The performer’s bra tends to be removed during the fan dance section of the performance, finishing the act with a full reveal. As a variation the performer may use fans throughout a fully layered striptease, or may open an act with a clothed fan-dance and then go on to perform a striptease without any fan work. Examples: Diva Hollywood (Starlight), Missy Malone (I Put a Spell On You), Amber Ray, Roxy Velvet.

When incorporating a fan dance into a bigger act, I believe it is important to have in mind exactly why you have chosen to bring fans in to the act. If you include a fan dance section without its purpose in mind, you run the risk of the fan dance section looking as though it has been added in to the act for the sake of including some obligatory fan work. Is the fan dance section the crescendo of the act, or has it been included to emphasise and compliment another aspect of the act? Are you using fans to bring a feeling of Golden Age burlesque to your piece, or are you using them to illustrate an aspect of your characterisation?

Lola Frost: Strip or be Stripped

When the purpose of your fan dance has been established, think carefully about how to ensure the fan dance section balances comfortably against the rest of the act. Think about where within the (presumably) linear structure of your act the fan dance will sit best. If it’s the highlight of your act, it may be best saved until last, but if it’s used to create atmosphere or character, it may be better suited to an earlier point in the act (unless, of course, you’re creating a ‘transition’ piece in which your character becomes a fan dancer).

This style of fan dance doesn’t require a great level of technical flair with regards to the dance aspect of the fan dance, but it does require that the act’s choreographer has a clear vision for the piece and that she/he understands how to structure an engaging performance.

Description: This take on the fan dance sees one of the above approaches coupled with a unique pair of fans. This may vary from stylising the standard feather fan in different colours or plumes – Miss Diamond Blush (rainbow colours ), Amelie Soleil (fire shades) alternative feathers (eg. peacock), through to replacing feather fans with fans made of or representing something other than feathers – Chrys Columbine (shells), Vicky Butterfly (rose petals), Missy Macabre (office fans). 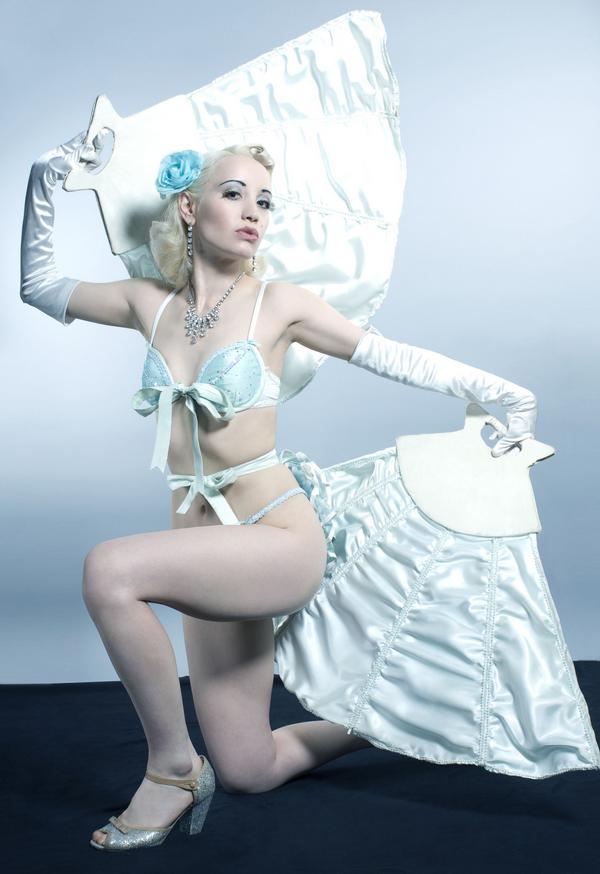 If opting for this addition to your fan dance, it is vital not to rely upon the gimmicky nature of your fans to provide substance to carry your act. Whilst they may well delight a burlesque audience tired of seeing feather fans, one must also remember that there may be many audience members unfamiliar with the tradition of the fan dance.

Whilst your act offers a nod to the traditional, it must also stand alone, away from that reference point. If it fails to do this, it runs the risk of alienating members of the audience who won’t ‘get it’.

I’ve seen performers who have clearly had a novel idea for feather fan substitutes and have built an act around their concept. Often this is in an ‘addition to a striptease’ routine, in which there’s a set-up to the fans being introduced, a short fan dance, and then a pasties reveal. The inherent risk here, is that the set-up to the introduction of the fans prepares the audience for the material or style of the fans, but does not pre-empt a dance with fans made of this material or in this style.

Think about why your character is dancing with these fans and communicate this clearly to your audience. Failure to do so will make you act appear to be a weak support for a gimmicky idea, lacking in substance.

Of course, this article is not intended as a one-stop summary of how to fan dance. There are many more subtle twists and stylisations out there beyond those I have outlined above. Indeed, this article may even have provided inspiration for subvertion. But if I could propose one tip that I feel proves useful to any style of fan dancing I would state:

The fans are not a stationary prop or a piece of the set – they move with you, they are an extension of your own body. Don’t ever loose track of why you have chosen to extend your body rather than perform with a stationary prop…