The Cost of Burlesque, by Dangrrr Doll.

Good morning, world! In the past several days on my Facebook, which unsurprisingly has a very specific mix of naked people and nerdy people, I’ve been seeing many cosplayers post ‘cost breakdowns’ of the costumes they make. This is a reaction to silly trolls on the internet saying that they only do it for attention, and them trying to show how much love and effort goes into every costume. Well… they put a lot of money into it, and to be honest, that makes me think more that they do it for attention. Don’t get me wrong – this is not what this blogpost is about – and to be completely honest, I see nothing wrong with putting tons of time and effort and love into a hobby (which sadly can’t often translate into a career) and then being pissed off when people don’t recognise how fucking hard they’ve worked. Holy hell would I be angry if I made a giant suit of armour with wings and horns and walked around and no one took my picture. Anyway…This comes at a time when the burlesque community is (once again) bitching at itself about pay rates, which haven’t changed in ten years, and which often don’t change (nearly enough, anyway) when you improve or put effort in. True, when I first started I accepted 20 and 30 dollar gigs and now I don’t do anything under 50 per show even for people I like. Most of the time I don’t accept those either, unless I really love the producers AND know they’ll let me get away with experimentation and fuckery (aka, they will let me practice my craft on stage – a very valuable resource for sure).

As a burlesque performer, the more effort I put into a costume, the more attention I want it to get, directly translated into dollar signs. When I posted about potentially doing a costume cost breakdown, one performer (with responses in agreement) said that sometimes she would just pull stuff from her closet for one-off acts to offset the fact that she was unable to make much if any profit from that act.

I get that when you’re first starting out, but we are being paid money to be on a stage in front of people and give them an experience – it shouldn’t be an experience they can have any time in their own living room with the $25 Hulk costume they got at K Mart. I watch burlesque performers scoff at regular joes on Halloween who don’t ‘put any effort in’ and shell out for store-bought clothes; to then turn around and justify performing out of your closet is just lacking self awareness**. Those people are dressing up for funsies – we are dressing up for money. We should be putting more effort into it. We should be ABLE to put more effort into it.

SO, with that prologue I give you the costume cost for my ‘Classic Metal’ act. This is the costume cost alone – it doesn’t reflect act creation and rehearsal time which is just as if not more important for a burlesque number. I’ve decided it’s dumb to include costs of stuff like makeup and travel, which I would have to pay for anyway and which I use multiple times (even my eyelashes, which I wear a billion times each even though it’s probably totally unhygienic). I also didn’t include the cost of sewing tools because, as a regular costumer, I would have that shit anyway. Rest assured that I have more tools and makeup than if it were Not My Job, by at least if not more than $1000, but it is my job, and it’s not imperative to this cost breakdown.

I DID include labour because many performers do not make their own costumes and either order custom or embellish off of readymade bases, and since I make custom work, I think it’s relevant to show how much my time is worth – how much I charge other people for it when I do custom costuming. I chose this costume because it is a typically burlesque piece which many other performers can relate to. My labour quote is less than it normally would be because I did not have to make the dress from scratch (it was a gift).

Are you ready for this? 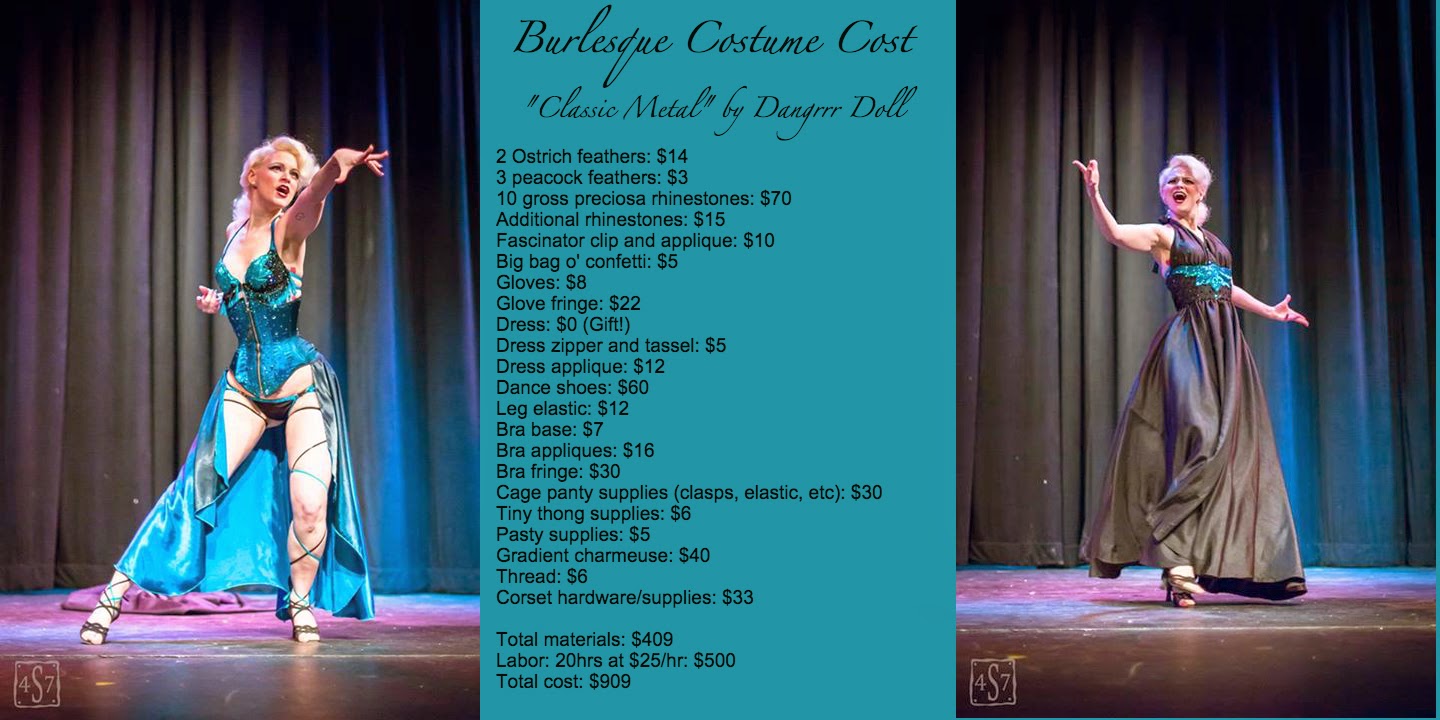 Not pictured is my ostrich feather fascinator which I use to hold my hair up, and my extraordinarily tiny yet ridiculously sparkly underthings (my barely-there thong and tassels pasties).

I spent a total of $409 on materials for this costume, even despite the free dress, with 20 hours of labour, making this a costume I would charge another person $909 to make for them. My labour charge is also less than many other costumers in the area by the way, if you were wondering.

Thank fuck I didn’t need an ostrich boa or feather fans for this number, which cost a minimum of $100 for low-quality China-made stuff, but really cost $200-$300 if you want something that doesn’t look like shit.

I’m pretty skilled at buying stuff cheap (three yards of that gradient charmeuse for $40 was a deal) and this is probably one of the cheaper costumes I’ve made, materials wise. So let’s break this down:

At $50 a show, I need to perform this act, specifically, nine times to make up for material cost alone. Including labour, I would have to perform it 19 times.

I perform 12-18 shows in average every month, which is more than most performers but about average for professional performers in NYC. Now, ask me how many I would be performing if I just did this same one act over and over again…

For NYC, you really need a minimum of four acts in rotation, especially since many shows require two acts, and every show has a different need and niche. I have close to thirty acts, and the majority of them use costumes which cost equal to or double this in materials and time.

With how much I perform currently, that means I wouldn’t start making a profit until six months in. Of course, having only four costumes also would probably mean I couldn’t perform in half the shows I do (theme shows would be right out). So, let’s say I perform eight times a month – that’s still really respectable, every Friday and Saturday perhaps – it would take me nine months before I could turn a profit. And after that, my profit for the year – eight shows per month for three months at $50 each – is $720.

Did you read that? $720. That’s your annual profit, if you only have four costumes, and if you perform at least eight times a month.

I recognise that it’s hard to just turn the status quo on its head, but instead of just saying “I can’t, we can’t” and being scared, it’s time for us to say “I can, I can,” revalue ourselves, and push for more. All of us, together, can do it. Movie tickets cost $20 with snacks that cost $15 minimum. Drinks in NYC cost $14 each. Burlesque provides venues with a valuable audience, an audience that drinks without causing chaos and destruction. They need us. We can charge more, from our venues, for our tickets. The audience is there.

**Edit: When I’m talking about people pulling stuff from their closets, I don’t mean reusing expensive stagewear like fans, dance shoes, fringe sets, etc. I’m talking about them using “that cute panty set I got from target for dates” or “this pompom hat that I wear every day in the wintertime,” aka regular non-costume clothing. As professional performers, it’s true that many of us have really epic closets!