This post is coming, in part, from two articles written recently about burlesque. The first is the ‘State of the (Burlesque) Union Address’ from last year’s BurlyCon, as given by Miss Astrid, producer of the long-running Va Va Voom Room (LA, NY, SF), Velvet Hammer alum, and emcee for, among other events, the annual Burlesque Hall of Fame pageant.

And the other is a tiered system proposed by Chicago impresario, Red Hot Annie of Vaudezilla Productions, producer of the Windy City Burlesque Fest, to determine the levels of performers and their skill sets, and subsequent rates of pay.

These two articles have opened a conversation about what determines a ‘professional’ burlesque dancer versus a ‘hobbyist’. And it has very little to do with money… 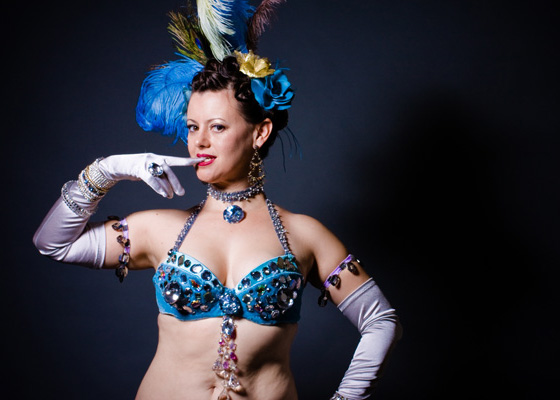 Some people have taken issue with the word ‘hobbyist’. Perhaps ‘amateur’ is the better choice. But no matter the word, we should be looking at the overriding characteristic that defines a ‘non-professional’ versus a ‘professional’. In my long and varied career as a burlesque dancer, I have seen a performer sew one strand of beaded fringe on her bra in the dressing room before the show and call that a ‘costume’, witness another barge into the dressing room and announce to any and all how she didn’t rehearse her act since she performed it four months ago, another sported hairy armpits in front of an audience of 1200 people. (PS—if you don’t shave for 1200 people, when do you shave?)

I would hope the previous statements would make you all shudder and genuinely feel sorry for the audience that had to sit through those performances. I would hope you are not reading this and saying, “So I didn’t rehearse – I had a late shift” or, “I didn’t have time to add any rhinestones” or, “they’ll never see my hairy legs through the fishnets”. Because when it comes down to it, the audience doesn’t care if you had a final, worked a late shift, or had to help Tommy with his science project. They entered in to a contract with you – they paid you to provide quality entertainment. That quality, by the way, is not based on your pay scale, the size of the show, or the price of the cover. And that’s the first definition of a ‘professional’ – someone who performs for twelve people with the same quality and energy as one hundred people.

That level of care goes back to the very inception of constructing a burlesque act. Let me ask you a question: How fully realized do you think you can make a ‘professional’ act in two weeks? Conceivably, if you were an accomplished dancer and spent hours studying one or more dance disciplines, you’d have the skills to build a choreography. If you had taken sewing classes, you could easily construct and embellish the costume that helps tell the story of your act. If you were accomplished at make-up and hair, you could devise a visage for your performance. If you had performance chops from years of performing, you’d have the ability to know how to anticipate the audience’s reaction. Add into those great many ‘ifs’ the rest of your life – like earning a living, spending time with loved ones, eating, sleeping, and rehearsing – not to mention the financial resources available to fund a new act, and it looks to me like it would take longer than two weeks to make an act worth seeing. Second definition of ‘professional’ is someone who spends the time collecting the skills needed to continue doing their art.

But just being an amazing performer is only part of your ‘job’ as a burlesque dancer. Do you have a facebook page with some snapshots? Or a website with your own url, with expert photos and video? Are you as interested as gathering a fan base as buying body glitter? Are you tweeting about your next appearance? Do you even have a Twitter account? If not, why not? Aren’t you proud of the work you are putting into your performance? Psyched to promote the shows you star in? A ‘professional’ understands that tickets need to be sold.

Whew! With all that, it sounds like a full time job!

And that is the definition of a ‘professional’.

After spending three years making the documentary, ‘The Velvet Hammer Burlesque’, it was no wonder that Penny decided to pick up the mantle held by her grandmother, Philadelphia burlesque dancer, Penny Starr. Or, as Penny Starr Jr. puts it, ”You can only live with the circus for so long before you want to join!” (She and Penny, Sr. have performed the first and only grandmother/granddaughter striptease act.) One year later, in 2004, Penny Starr, Jr. became First Runner-Up at the annual Miss Exotic World (Burlesque Hall of Fame) burlesque pageant.

She has performed and/or instructed at a number of legendary venues, shows and festivals, including the Va Va Voom Room, Starshine Burlesque, Margaret Cho’s ‘The Sensuous Woman’, the Slipper Room NYC, Tease-o-Rama, BHoF, BurlyCon and the New York Burlesque Festival.

In addition to dancing and performing, Penny is the founder of the All-Star Burlesque Classes, and produces and directs the Princess Farhana line of belly dance and burlesque instructional DVDs. A centerfold and columnist, Penny has also consulted on such shows as ‘Chuck’ (including a cameo as a bachelor party stripper), ‘Castle’, and has recently taught tassel twirling to the cast of ‘Water for Elephants’.

There’s No Such Thing as a Free Gig…

BVB: Stepping Out of the Full-Time Performance Pressure Cooker