The day started perfectly. The sun was shining, the coffee tasted like velvet and I had packed almost everything. Almost. It became clear that my new costume was way bigger than it looked and so I found myself climbing to the attic once again to get another suitcase. After playing this familiar tetris game our whole family was ready to go. My dogs, Milo and Nemo were thrilled to find out that they were coming too! Train travel was easy because the boys are quite experienced travellers. It was just awfully hot in the train. Yes, sometimes it can be too hot even though I’m always complaining about the cold! 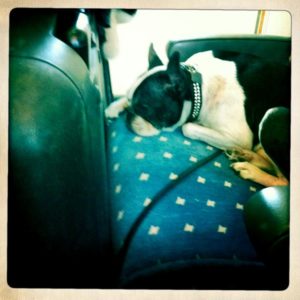 Milo along for the ride… © LouLou D’vil

We arrived at the hotel – where almost all the performers stayed – unpacked and had a lovely dinner. We ate blue mussels with some white wine and then started to get ready for the Fiery Warm-up party. This night would be a meet and greet style event, meeting old and new friends. I was especially excited to see Satan’s Angel and show her my new tattoo of her!

After walking in snowy streets and sharing the latest news with Miss Anne Thropy we finally arrived to the place. When I stepped into Dubrovnik I saw Satan’s Angel’s famous costume made by Hedy Jo Star, and many familiar happy faces. The atmosphere was loving. A few drinks, lots of talking and dancing, a couple of burlesque performances and then listening to amazing stories by Satan’s Angel. She had Luna Rosa and I in tears with her vivid way of speaking to the audience. She really was the highlight of the night and I was so happy to see her and other performers after a long time. We had such a good night, but the real fun was about to start when Luna realized that she couldn’t really wear her ballerina slippers in snowy Finland. Come on girl, winter boots on and then back to the hotel to have some sleep!

Four hours of sleep and I was up again and getting ready for the day’s photoshoots with the amazing Kaylin Idora from New Orleans. 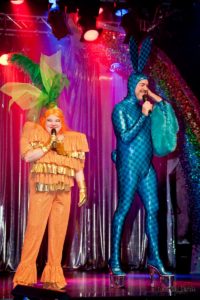 We shot my new costume and some new ‘The Buxotics’ pictures with Luna Rosa at the beautiful Russian restaurant Saslik. That place is so beautiful and people were so lovely to us. I recommend that you go and see it sometime yourself! Shoots were fun as usual and I can’t wait to see the results!

After the shoots there was just time to eat with the girls and then get ready for the first festival night at Gloria. I ended up wearing my red dress and hair flower and then went to help Angel with her corset. After some dress changes we were ready and stepped into the taxi with Mr. Willy and Luna and were on our way to party! Quick shoe change, drinks from the bar and the show was ready to start. The show was opened by fabulous duo, Scotty The Blue Bunny and Welma Jackpot. I got to see all the performances because I didn’t perform on that day. It’s nice sometimes just to watch other people and have a couple of drinks, because you don’t get to do that too often! One of the highlights of the night was Christopher Wonder. I had never seen him before and I laughed like a hyena when he did his magic tricks. Bang, bang, bang and lots of confetti! My kind of humour for sure!

After the show I was so tired that we decided to go back to the hotel and try to sleep a little bit more this time. Tomorrow would be a show night!

Morning started with a huge breakfast at the hotel and after that it was time to go back to bed. Just for a little bit. The alarm woke me up after an hour and I took the dogs for a little walk. When I got back it was time to start getting ready for the show. Costume and music check, a little rehearsing, checking the drums and then I was off with Luna to Gloria to do our tech. The atmosphere backstage was happy and everyone was excited about the show.

I was especially excited because this night was my new act’s premiere. Finally my ‘Northern Queen’ would come alive after working on it for about ten months.  At 9PM the show started and the audience was greeted by Scotty and Welma. Because of the fierce applause I could tell that this audience would be great! But at the same time it didn’t surprise me so much because they always are in Finland! I started to get myself ready early because the new costume isn’t the fastest one to put on. Thanks to my friends Anni Hiro, Paula Laaksonen and Fiona Timantti who helped me to create it all.

Everyone who came off stage had a huge smile and the show was running well, thanks to many hands that helped with everything  backstage. Then it was my time to go on. I felt so happy to get on stage and luckily everything went well. You don’t always know that when you do your act for the very first time, no matter how hard you rehearse. But I did enjoy every moment!

After my solo it was already time to get ready for my duo act with Luna Rosa. ‘The Buxotics’ and our ‘Jungle Grind’ act would be introduced to Helsinki for the very first time. Drums were ready on stage and so were we! We let our inner tigers to come out and play and enjoyed every minute!

Quickly backstage to change and we were off to see the rest of the performers. We saw the statuesque Sydni Deveraux, fierce tassel twirler and Reigning Queen of Burlesque, Miss Indigo Blue, super hot Erochica Bamboo and what everybody was waiting for the whole night in excitement: The legendary Satan’s Angel. But there was also a surprise coming and that surprise got me in tears, again. I was such a cry baby during the festival!

President of the Helsinki Burlesque Festival, Bettie Blackheart, got on stage with Satan’s Angel and they performed fabulous fire tassel twirling together! It looked so beautiful and I was so happy for Bettie and about the fact that we are able to work with legends and learn from them. It was fantastic way to end the show and the applause was just overwhelming.

After the show the performers party was about to start!  Luna, Angel and I went back to the hotel with our huge luggage pile and decided to chat a little… Until 10 am!  But it was so worth missing another good night’s sleep!

The 5th Helsinki Burlesque Festival was a great succes and I had the best time. Thank you everybody for being the way you are!