“Welcome to the legendary Tim Tam Room, where the music sizzles, champagne flows, and dancing beauties tempt and tease. When Tansy, the club’s crown jewel, announces her imminent departure, the club’s MC is left holding his heart in his hands. Exuberant hijinks and salacious striptease collide as this night of classic burlesque unspools into a sequin-drenched, raucous farce.”

Eager To Lose, a “burlesque farce” which has received glowing reviews from The New York Times and Time Out New York, has presented the perfect opportunity to enjoy a chat with the delightful and beautiful Tansy, ‘The Elizabeth Taylor of Burlesque’.  Tansy told me all about the production, and with the run extended until November 9th, you can still experience the show. Read on and snap up a ticket!

Is Eager to Lose long in the planning, or more the result of chance meetings or introductions? When and how was the project initially conceived?

It has been long in the planning, indeed. I met the directors, Wes Grantom and Portia Krieger, at The Williamstown Theatre Festival in 2008. They were both Directing Assistants there, and I was part of the Non-Equity Acting Company. As that place so often does, it created lasting friendships and professional relationships between us. When I started performing burlesque early in 2010, Wes and Portia came to some of those first shows. They were floored by how wild and wonderful the world of burlesque was, and exclaimed, ‘We have to do something with this!’ We threw together an unscripted, one-off event at The Tank Theatre with two actor friends of mine, and a cast of some burly folk (Calamity Chang, Albert Cadabra, Grace Gotham, and Gemini Rising). With the success of that evening, we were encouraged to continue with the project and that’s when we brought in the playwright, Matthew-Lee Erlbach.

Can you describe your background and/or experience of theatre and production? Was this very much a new venture for you?

Theatre has been my passion for as long as I can remember. My mother realised at a young age that I had a knack for dramatics, so she threw me into the local community theatre in our hometown in Florida. As she said, she “created a monster,” for I’ve been completely addicted to showbiz ever since. From President of Thespians in high school (dork!), to a BFA in Acting from FSU, and then the big move to NYC, doing plays is nothing new.  However, this is the first piece of theatre where I’ve been on the creative team. Choreographing the show was also a new, exciting challenge for me.

Matthew-Lee Erlbach wrote the script in rhyming couplets. Can you explain this creative decision and how effective it proved to be?

Lovers of Shakespeare would agree that the rules of verse are limitless. The world of the language is larger than life, with a boldness and richness that allows for so much play within the text. Burlesque, too, is grandiose with elaborate style and jest. Throw the two together and you have a surprisingly perfect pairing full of boundless possibilities! Mr. Erlbach has done an incredible job creating this elevated world, which the play lives in, through his brilliant use of words. You might have to see it to believe it, but truly, it works!

How did you work with the rest of the creative team; has it been a smooth, cooperative and enjoyable process throughout?

We all care very much for each other, so that creates a lovely environment to build in. Of course, we are all stubborn, so there are days when it’s tougher to see eye-to-eye, but we all have the show’s best interest at heart. That’s the most important thing, and knowing that makes it easier to trust someone else’s vision when it differs from yours.

What were your key areas of contribution; was your principle role to oversee and inform those involved about the burlesque aspects of the production?

That definitely was an enormous part of it, but no, it’s been so much more. From the original character ideas to bringing in the guest burlesque stars, to coaching/educating the performers and designers, to all of the movement in the show, it’s been a full time job! After finding me in the costume shop constantly and then onstage set dressing and prop handling, my directors had to pull me aside during tech and say, “You HAVE to stop doing everything! It’s time for you just to be an actor and focus on your part in the play.”  That was a hard concept for me to wrap my head around because I just love having my hands on everything. But having brilliant directors and an uber-talented design team made it easier to let go of that control and trust that it would all come together. Which, of course, it did.

Would you call this a ‘burlesque show’ in essence? What should burlesque fans expect if they attend this show?

The show starts just like your everyday burlesque show. There’s a bar, a stage, a live band, a charming emcee, and back to back burlesque acts. It’s not until about twenty minutes in that the play starts to take shape. There are still burlesque acts throughout, but the audience starts to focus on the story plot, and each number begins to heighten the stakes of the play. 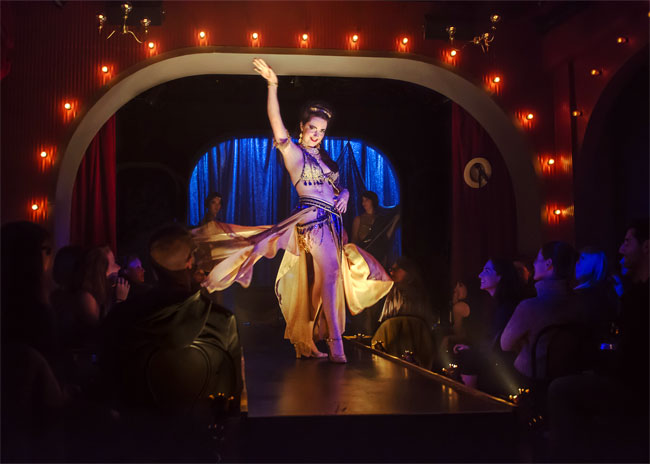 Who are some of the special burlesque guests you have featured in the show, and which performers are coming up during the rest of the run?

Oh my gosh, the guest stars have been such a treat! I asked some of my favourite ladies to come and join me Off-Broadway and try their hand at the theatre. Trixie Little, Angie Pontani, Kitten LaRue, and Perle Noire have all taken on the role. It has been an incredible gift for the actors involved to get to share a stage and dressing room with a true burlesque superstar. It was very important for me to blend the two worlds, educating the actors and audience with the ‘real-deal’ so to speak, and also saying thank you to the burlesque family that I love.

Can you describe the rehearsal process and some of the interesting creative discoveries and decisions made at various stages? Has the show changed and developed throughout the run, too?

Through several workshops and previous incarnations of the piece, we had a pretty good sense of the script going into the rehearsal process in September. That being said, SO much changed over those four weeks of rehearsals, and even into previews. There was a lot to learn from the actors in the room, and figuring out how to best utilise their strengths and talents. From cutting scenes/numbers to adding brand new bits/endings, to being handed new script pages a few hours before curtain, we were always kept on our toes and ready for change. That’s just part of the process of creating a new piece of theatre. Also, choreographing burlesque acts without having the costumes built yet was an enormous challenge, as they are such a key element to the movement and mechanics of a striptease. In theatre, you get costumes for the first time at dress rehearsal. In this show, we had to have them made and ready much earlier, as it would have been impossible to feel comfortable and confident in them too close to showtime.

Can you describe the type of audience the show has attracted, and the audience response to the show?

There has been a wonderful intermingle of crowds to see the show. From young creatives to older theatre patrons, mixed with downtown burly fans, there really is something for everybody. I had a ninety-year-old woman approach me after the show and tell me how smart and beautiful she thought it was. That’s the good stuff – when the people you don’t expect to get it surprise you with such compliments and warm affection. But mostly the reaction we’ve been getting is, “I couldn’t stop laughing!”

Are you pleased with the reviews you have received so far? The show has been extended until November 9th; do you hope to enjoy another run and/or take the show elsewhere?

The reviews have been great! From Critic’s Pick in Time Out to a nice spread in The Times, we are all very pleased with what the critics have said. Ultimately, we are super proud of what we created, and are happy that the press likes it too. It makes it that much easier to put on a grand show every night. There is definitely talk of a next step and possible travel for the show. It will be exciting to see where this adventure leads us!

Eager To Lose is at ARS NOVA NYC until November 9th. Click here to view a trailer, view show times and purchase tickets!