As I was otherwise engaged on the Thursday of the Toronto Burlesque Festival (although naked where I was, in true spirit of burlesque) I have gone to Great Canadian Burlesque‘s Dolly Berlin for a summary of her experiences that night.

One thing is certain: It was hot.

Dolly Berlin was doing the merchandise table and watching from the back of the bar that made up the Festival’s Meet & Greet Teaser night. Peddling such sexy wares as Skin Tight Outta Sight and Toronto Burlesque Festival t-shirts. A heat wave was rushing through Toronto, and not just in terms of the gorgeous talent we had flooding the city. It was “extremely dripping sweaty hot” in the bar from the beginning of the night on. This wasn’t going to affect the performers or audience though, as the night was packed.

The Howling Bullets opened the show; a new super-group band formed from other bands in Toronto. Jordan Sane and Dano von Drat are featured in the lineup, and are both ‘burlusbands,’ meaning that they’re married to or dating burlesque dancers. Their Horror-Rockabilly-Surf amalgam music set a great opening.

Performers flooded the stage shortly after that. “I really just wanted to stand on my chair to watch…” Some highlights Dolly mentions from between selling are as follows:

Toronto and Hamilton’s own Mlle Belle Jumelles, who performed her ‘Heavyweight’ act, with a retro scale, and an “amazing bra” made of cascading sequins. “It’s an ode to big girls act,” Dolly describes. Having seen it myself previously, I have to say I love how she cheats with the scale by removing clothes instead.

Betty Pickle came in from Florida, and was the performer who traveled the furthest that night. She had a giant can of hairspray and played to “a very adorable 80’s prom” theme, with a mashup of different music. Dolly also saw her in Boston this year at the Burlesque Expo.

Halifax Strip Search winner Helena Darling performed “a really cute sailor number.” Dolly noted thatf all of the Halifax stars from the night were decorated with tattoos, and were part of a large gorgeous “Halifax mafia” that held a table in the middle of room. Among those seated were Miss C, Miss Magenta, Miss Kay Liscious, and more who would perform on Friday. 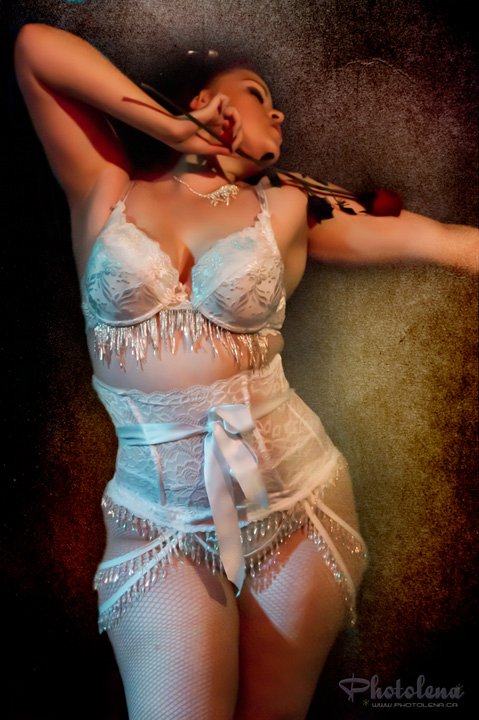 Mena von Fleisch closed out the show and performed her ‘Too Drunk to Fuck’ housewife style act. Mena hails previously from Halifax, then claimed the title of Toronto’s sweetheart, but has now returned back to her Eastern home in Halifax. I personally have not seen this number, but I can say that I definitely pay attention any time I do see Mena on stage. She’s a smoking hot redhead with legs for miles.

There was also a lot of real meeting and greeting going on at the Meet and Greet, which I’m sorry to have missed. “People were trying to guess who was who as they were coming in.” Sometimes it was a guessing game, but one performer made a memorable entrance. “Ruby Joule walked in and was the fanciest person in the whole of Mitzi’s Sister.” Everyone was dressed for the heat but “…she just walked in, her hair’s perfect, she’s not sweating, and she’s in this gorgeous gown, and we’re like ‘Who’s that?!'”

Dolly mentioned that it was nice to talk in person to the people you’ve only met on the internet, and I agree. One of my favourite parts of the festival is all the networking that occurs! But sometimes it can get awkward. “There are certain people you recognize from pictures, and it’s weird to introduce yourself because you’re like, ‘Hi I’m Dolly, and I already know you’re _____’ ” I recently had the same issue! It’s hard to navigate that familiarity you may have with performers over the internet when you finally do meet them in person! Somehow, ‘So, I’ve seen you naked on YouTube fifty times’ never seems like the smoothest opening line, especially if you’re not sure they know who you are either!

A main discussion point over the night was the insane heat. Despite the packed crowd and the temperature there was no reported drama to match it. After the show Dolly reports a mass exodus of performers and crowd. She, however, stayed at Mitzi’s to partake in their lamb poutine. A good choice, I think. One I would have made, in her place…