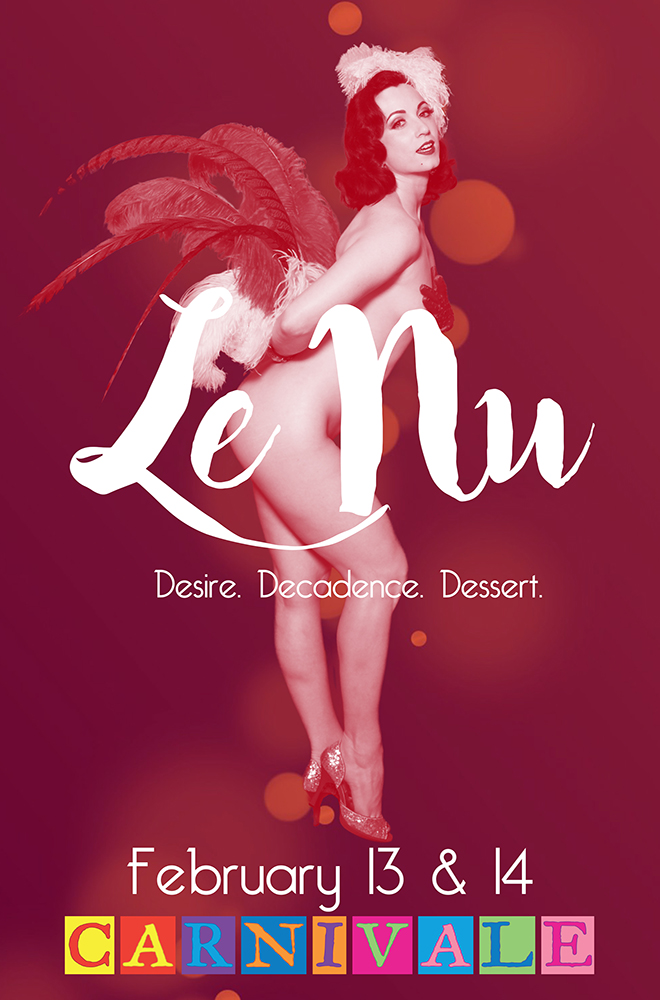 For more than a decade, Michelle L’amour – Miss Exotic World, Reigning Queen of Burlesque 2005 – has been bringing Chicago the “Hottest Night of Winter” with amazing Valentine’s Day productions.

And now Michelle is preparing to unleash an entirely new show – Le Nu – an “intimate European inspired evening like Chicago has never seen”. Guests will be immersed in the sumptuous surroundings of Carnivale’s ‘Samba Room’ and served decadent desserts while a burlesque superstar and a hand picked collection of amazing musicians, dancers, absurdist clowns and more entertain them.

Michelle, whose Butthoven video became a viral sensation clocking millions of views, has a devastating repertoire. From her legendary Sally Rand tribute to her “heart-f*cking” La Panthere, she has cemented her place in the burlesque history books.

Michelle L’amour is relaunching her entire brand with the most daring show she’s ever conceived. We’ve heard a few juicy details about her jaw-dropping new act, and take our word for it that it is an UNMISSABLE spectacle. Expect to go “beyond burlesque” for a sensual evening of artistry that “revels in the bold expression of vulnerable desire”. AND they’re serving dessert! If you like passion, live music, daring feats of skill and absurd humour, bring your lover and spend a romantic evening with the decadent cast of Le Nu.

21st Century Burlesque is unable to reveal any further details about this steamy show – you’ll have to be there to find out!

Quoted in major international newspapers and held in high esteem and affection by the international burlesque community, 21st Century Burlesque Magazine has documented the contemporary burlesque scene since 2007. Founded and edited by Holli-Mae Johnson.

21st Century Burlesque has been the leading publication on burlesque and cabaret for 12 years, respected worldwide as an industry authority. The magazine runs the annual Burlesque Top 50 global poll.