“These are my friends and this is my life.” 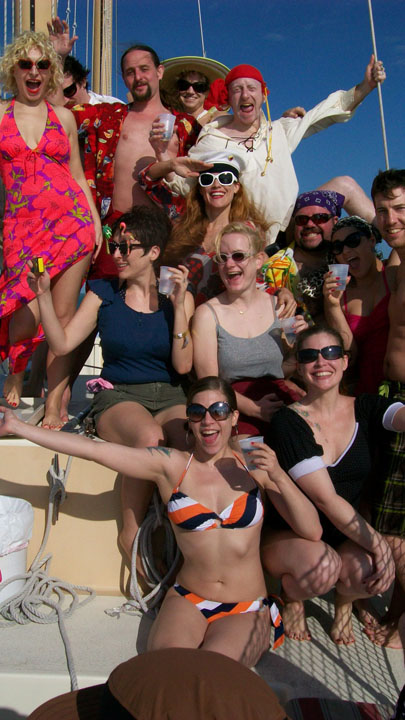 Batten the brassieres and hold onto your hatches! ©Trixie Little

Through some magical combination of warm weather, gorgeous people, lush foliage, hours of hot-tubbing, amazing entertainment and cases of fruit flavored Vodka; the Key West Holiday Extravaganza was the first festival that really did feel like a vacation. A tropical getaway with all of your crazy sisters, gay brothers, eccentric aunts, kissing cousins and your pasty Uncle Murray.

The memories are all vivid and postcard worthy:

A wind-swept afternoon sailing under perfect white clouds on luxurious turquoise water contrasted by the exposed backsides of my friends and lover who tauntingly wagged their junk at us from a nearby boat.

The soon-to-be infamous all-night hot tub party that not only yielded many hilarious Spin -the-Bottle pairings, but also resulted in the eviction of several prominent burlesque guests from a respected bed and breakfast. (Names withheld to protect the guilty!)

Murray Hill masterfully commanding Hot Toddy to demonstrate tea-bagging on a middle aged woman on the edge of an outdoor stage nestled into tangles of palms and ferns while burlesque performers dangled adoringly from the decks above.

Kayaking with Johnny Porkpie deep into a mangrove cove with throngs of topless paddlers lead by Roxi D’Lite and Gigi La Femme- who were especially intent on exposing themselves to nature.

A tipsy Tatah Dujour taking a cake in the face so that birthday girl Minnie Tonka didn’t have to.

Slipper Room owners James & Camille Habacker pedaling around on a tandem bike with their kids while on a site-seeing-burrito-eating bike tour.

Sunday afternoon Bingo that had everyone giddy to win tropical novelty crap while hopped up on mile high Key Lime pie. Darlinda – I hope you use that resin dolphin clock!

Julie was kissed and licked by her synchronized man-semble. ©Richard Just

What else can be said about the magical sexiness of Julie Atlas Muz that hasn’t already been said? I can only try to do justice to the heart-tugging hilarity of her synchronized swimming number on Friday night. As someone who got started in burlesque after a four-year immersion in the glamorous athleticism of water ballet, I’ve always admired Julie’s underwater work, but I can say with confidence that she achieved a new milestone in Key West. This feat was accomplished in part by the clever casting of some of the sexiest men we all know: Ken Ball (Slipper Room’s dapper doorman, DJ & bass player), DJ Momo Taro (Pop of Gigi & Pop), Mat Fraser (UK’s astouding Seal Boy & muse to Ms. Muz), The Evil Hate Monkey (my primitive partner in crime), Marquis Von Phister (strapping hunk of KWBQ), Johnny Porkpie (author and Pinchbottom Burlesque co-founder) and Golly G (lithe KWBQ dancer).

Now imagine this illustrious man-semble attired only in red swim caps and pink jock straps swimming in formation with a blond bombshell posing perfectly above their heads. The site of these muscular, manly derrieres completing cascading dives into the stage-front pool on Friday night had the audience alternately laughing, crying and squealing with delight!

Given my personal love affair with synchronized swimming, I became so enraptured with the moment, I felt for a second as if Julie was performing a living dream that only the two of us could understand. But the deafening applause brought me back to my senses in time to drop my jaw into my lap. It was at that moment that Julie was first licked and then kissed all over every limb by each glistening guy, only to be lifted high above their heads and offered up like a goddess to the crowd. Hearts and time stopped. It took a moment to regain my lucidity and ponder the full scope of her genius. With that glorious number, Julie was embodying every showgirls’ fantasy: being worshiped by sexy people, looking gorgeous doing it and loving every single second of it. Chills. Tears. Joy. Love. 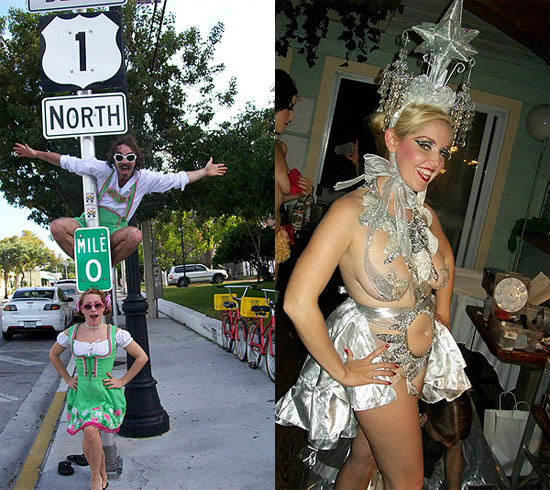 Left: Monkey and I wore pastel colors to try to fit in while sight-seeing at Mile Marker Zero. Key West is the southern most part of the continental United States. Right: Co-Producer of the KWHE, Tatah Dujour. ©Trixie Little

It’s hard to top that moment, but the truth is that every single hand-selected act brought it BIG TIME. I could go on and on with the love fest, but I’ll spare you from gagging, dear readers. Allow me to just mention a few more personal highlights…

– Nasty Canasta’s back side as seen in a green barely-there piece of fabric/gown.
– Hot Toddy’s hilarious portrayal of a skeezy lounge lizard
– Dirty Martini jumping into the splits for her finale
– Having Uncle Murray to lead Bingo
– Mat Fraser’s indescribable Kali-like squat with arm wave and rapid tongue-rippling
– And sharing a fancy private guest house outfitted with hammock and hot tub with Michelle L’Amour and Franky Vivid! 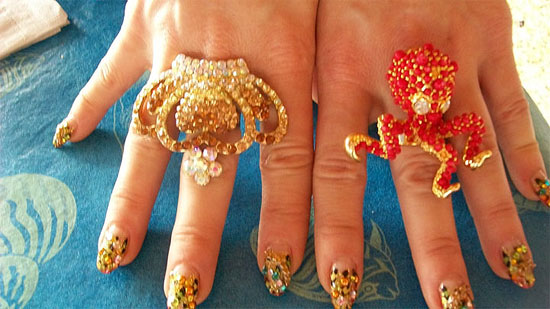 Dirty’s bling was on her tips – actual CHAIN set into her nails. The rings were nice too! ©Trixie Little

Credit and applause is also due in spades to organizers Tatah Dujour & Marky Pierson (well-loved Key West masterminds who cooked up the whole crazy idea) and Thirsty Girl Jen Gapay (illustrious NYC producer and co-founder of the NYBF). They are truly professional party-ers and party-makers who I would follow to the ends of the Earth! 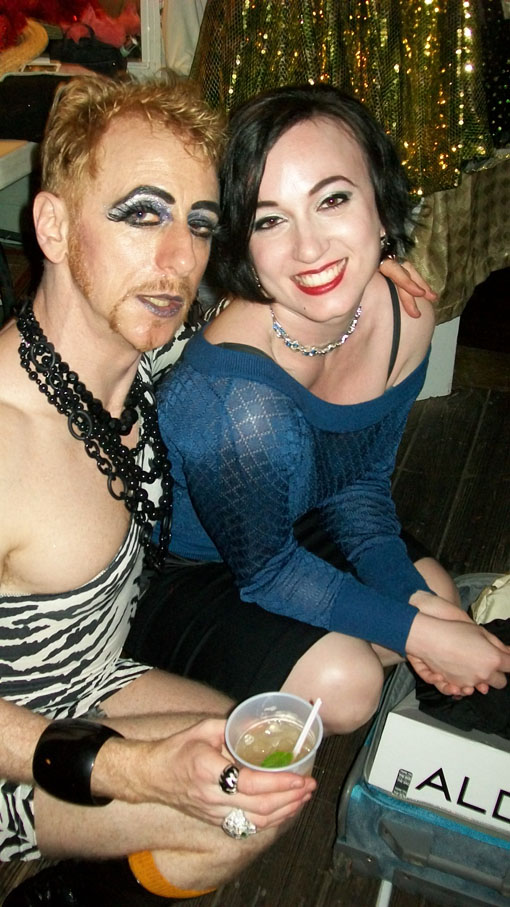 It’s hard to explain to normal people about the bond we have in our US burlesque community.

What we do requires such a mix of self-acceptance, self-indulgence, bravado, and hard work that we run the risk of competing all the time.

But it’s people like Dirty, Julie, Indigo and Tigger whose generous spirit over the years has constantly empowered instead of impeded relationships.

So, when one year seems to run into the next and success ebbs or flows, it’s family vacations like this one that give us the chance to reconnect with what’s truly important: love, laughter and glamour…