Tales of the Cocktail is a week long festival of all things ‘cocktail’ – attendees include bartenders, distillers, liquor reps, writers and folks who are simply cocktail enthusiasts. I was there to learn about the industry and spread the word about Montanya rum, who recently hired me to be their brand ambassador. I had convinced the company to fly me in early to catch the second night of the kick-off to the week – Cointreau’s grand two night burlesque party at the House of Blues, starring the face of Cointreau, Miss Dita Von Teese… 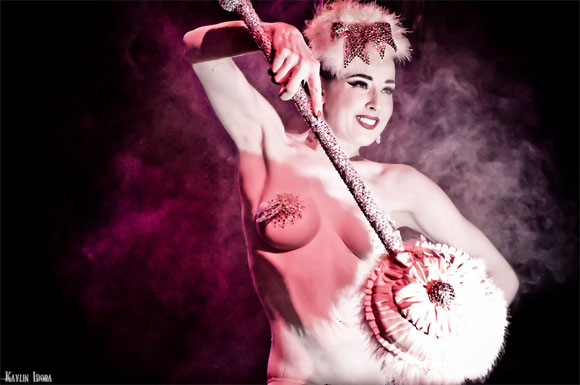 ©Kaylin Idora – Please respect copyright and request permission for use.

I slid in to The House of Blues from a decadent dinner with some Texas bartenders, arriving in the VIP room with enough time for a couple photos on the Cointreau ‘orange carpet’ that Dita, and the rest of the show’s cast – Perle Noire, Selene Luna, Coco Lectric, Duke Lafayette, Kitty Twist, Roxie Le Rouge, Foxy Flambeau and host Murray Hill had walked an hour before.

The place was packed with a combination of burlesque fans and Tales attendees, most of them dressed to the hilt (there’s a new generation of bartenders dressing like old-time bartenders, and they mixed nicely with the Dita fans, in their vintage frocks and little hats), and I squeezed through the crowd to secure a spot up front near New Orleans burlesque historian and producer, Rick Delaup. Rick had handpicked the local talent for the show, Perle, Coco, Kitty, Foxy and Roxie.

Murray Hill stepped out first to warm up the crowd and bring on Dita for her first number –  her Be Cointreauversial boa-feather fan-glass act. The curtains parted to reveal Dita, wrapped in a huge deep orange faux bird of paradise feather boa. Her boa and costume are heavily laden with rhinestones and jewels, but Dita moved like they were weightless as she walked down the catwalk and greeted the crowd. (Catherine D’Lish created the costume and there’s a great video on the making of this costume here…)

Dita kept mostly to the back of the stage as she slipped out of her costume and handed it to Roxy Le Rouge, dressed as a scampering Cointreau’s vintage Pierrot mascot, but once she had her fans in hand (made of the same bright feathers), she moved out on the catwalk and swept her fans around her body and over those lucky enough to be pressed up against the stage.

Each step of her act raised the volume of the crowd, and by the time she took a final dip into the slowly turning oversized Cointreau Teese cocktail, the crowd was roaring.

Following the curtains close Murray, who’d been watching from the wings singled out an old gent in the balcony who looked like a future version of Murray and whose expression revealed he was completely agog at Dita’s performance. Murray teased that the fella would be ‘giving it’ to his girl later and that bit became a running joke through the night. It’s well known that Murray’s a great burlesque host, and his ability to connect and play with the audience no matter how big the room, is a key part of that talent. The crowd loved it, and loved him.

Coco Lectric from Austin hit the stage next, working the front of the stage and on the generous runway while the breakdown/setup for Dita happened behind the curtain. It’s hard to pick an act to follow a number with that much extravagance, but Coco was a great choice. I’ve seen her perform at festivals in New Orleans, New Mexico, Austin and at Miss Exotic World, and I love her big teasing eyes, naughty gestures and gymnastic boa work. She knows how to work the crowd over, pulling them in with a crook of a finger, a flick of the hips and pausing to give them a look that says, ‘You want to see more? Beg for it.’ And beg they did.

Murray kept Coco out onstage, chatting with her and putting his face into her propelling tassels. I’ve seen him do the same shtick, at the New York Burlesque Festival and I think it’s a really generous way to give the ladies a little bit more stage time and give the audience a longer gaze at the gorgeous performers.

The only male performer of the night, Duke Lafayette, was on next, and I’d heard he’d toned his number down after complaints the night before. A regular performer at The Box in New York, I knew of him, but never had the pleasure of seeing him live – and after seeing him live, I’ve got to say, it was a pleasure indeed.

Petite Selene Luna, who started out in the famous LA troupe, The Velvet Hammer, brought a classic gown and gloves number onstage to a soulful version of That’s Life. She’d been semi-retired from burlesque when Dita invited her to perform with her at Dita’s LA show last year. Her command of the audience comes not just from her unique physique and years of practice on the burlesque stage, but also from her natural exuberance and the way she walks the stage, giving love to the whole room.

Mixed into the evening were a few very artfully made mini-films starring Dita and illustrating the history (or legend) of three vintage Cointreau cocktails; the margarita, sidecar and cosmopolitan. The flow of the evening was seamless; there was no intermission and the entertainment never lagged. I was up front, standing in four-inch heels and never once thought about moving back or sitting down.

Part of my desire to see the show was that Dita was showcasing three numbers I’d never seen live. The next number, her Powder Puff Pinup Show number, hadn’t seen the stage lights in four years and I’d been pretty convinced I’d never see it. I loved the concept – Dita emerges from a huge sparkly gold compact, as a powder puff in pointe shoes. She has two assistants dressed as gold cased perfume and lipstick (those roles were filled by Foxy Flambeau and Kitty Twist). The costuming reminds me of the old product pageants where ladies were dressed like showgirls wear household appliances as headdresses, simultaneously lovely and slightly ridiculous.

The prop is gorgeous and the mirror inside reflected Dita beautifully as she posed and striped out of her powder blue corset and pink powder puff tutu. In a wonderful, teasing move, she removed her bra and side tie panties behind an oversized powder puff, giving the illusion that she could be wearing nothing behind that little circle.

After revealing pasties and a g-string, she took a handled puff, coated it with powder and at the edge of the catwalk powdered her lovely body, letting the clouds of powder roll over the audience. Stopping for a moment she searched the front rows, and upon finding a bald head, reached out with the puff and liberally powdered his head.

Selene and Duke each came out once more, Duke pushing the kink a bit further, and delighting the women in the crowd. Even after a backstage demonstration of what I missed on Monday, I didn’t see what the fuss was about, though it’s likely a bit harder to shock me than corporate folks. Selene in a more dramatic number, rode a miniature chopper out onstage, in a hip-shaking version of her tribute to Tura Santana.

The Queen of New Orleans burlesque, Perle Noire, was in the last set as well, and you could feel the hometown love pouring out of the audience. Perle is an incredible mix of raw sex and pure elegance, slow and sensual one moment and a whirlwind of movement the next. Her energy moves in waves over the room, all the way up to the balcony. The house was shaking and moving as she finished with her acrobatic banana skirt tribute to Josephine Baker.

I’d first seen Dita at New Orleans’ Howlin’ Wolf at the first Tease-O-Rama in 2001 and had been bowled over by her duets with Catherine D’lish, so it was fabulous to see her again in New Orleans, almost ten years later, pushing the glamour, the tease and the art of burlesque such great heights. Absolutely inspiring…

Beautiful images by Kaylin Idora. (Please respect copyright and request permission for use.)

Did you enjoy this review? Why not leave a comment below…