After an epic trip from Australia to the desert I’m finally at the Burlesque Hall of Fame in Las Vegas, accompanied by my cute as pie Mama Kitt, a plethora of my best friends and fellow performers. I’ve been reunited with people that I haven’t seen in years. When I toured the United States and Canada in 2012 I swore that I would be back super soon. Unfortunately life takes over; after completing a thesis in 2013 and spending 2014 working and touring around Australia, 2015 has been the mammoth year for me. Starting my masters, a new job, moving to Sydney and coming back to the United States.

When asked about my preparation for the competition I thought that writing essays and doing job interviews for my muggle life probably doesn’t really count, but life has been so hectic I’m just treating BHoF like another gig. Albeit, an insanely immense, exciting, nerve-wracking gig. My preparation for a big gig like this was regular rehearsals, upkeep on the costume including re-handbeading and making sure the feathers were in good condition after being squished into my big boy suitcase known as Zeus.

“Man, I can’t believe it!” Miss Poison Ivory is almost panting in front of the size of the stage. “We’re going to be on this stage in a few hours.” It’s starting to sink in. We’re competing for Best Debut. It’s Tournament of Tease day at the Burlesque Hall of Fame Weekend and I’m sitting next to the wide-eyed member of the debut group about to take to the stage.

Nervously scurrying around the cavities backstage, it’s lavish. The green room filled with leather couches. Standing in the wings of The Orleans stage and looking out across the empty seats is indeed a harrowing thought: that will be a sold out audience of sparkly, beautiful glitterati in a matter of hours. The crème de la crème of burlesque royalty will sit their fine cabooses down and watch us all perform; icons, legends, kings, queens and many of my idols will be in these seats. Nervous much? Just a bit. I tell myself that as long as I don’t trip over, accidentally shit myself or throw up from nerves on the judging panel, I should be fine. Should being the operative word.

While I’m getting those pre-show nerves in check, soft French music is filling the theatre and Raven Virginia is teching in half her costume and her exercise tights. It’s a very glamorous look. The lights are being built. Everyone is nervous but the energy is electric. The competitors are so incredibly friendly it doesn’t feel like a competition. Hugs go around for people you’ve never met but already consider family.

I asked Zelia Rose, my fellow Australian competing for Debut, how she is feeling right now. She looks nervous and kinda tired when she looks up at the stage and just says, “Wow, this is really happening… The stage is the biggest I’ve ever worked on – it’s long and so deep.”

Once Pastel Supernova jumps offstage with a beaming smile she says, “Ahh. I love being in tech; it’s very calming, all the sounds of the stage are very nice.” Pastel comes from many years of ballet and contemporary dance – a very uptight world – and she tells me she never thought she’d do anything so fun. “I first did it as a joke and had the most fun of my life and never looked back.”

Renee Holiday is warming up her incredible vocal pipes – I hear a deep guttural groan from fellow Aussie Charlie D. Barkle. “Oooooohh yeah. Classically trained… so good.” What a voice. Charlie comes from the world of musical theatre and knows a good vocal note when he hears it. But let’s face it – we all know Renee’s operatic number is going to blow the roof off the Orleans.

Perle Noire just bust into some splits onstage. We… are… floored! The stage manager just intentionally drops all her things onstage in awe. Even the tech run of Gin Minsky and Perle’s duo is dazzling! Their fast footwork is just made all the better by their Swarovski covered shoes. We all know the competition this year is going to be intense. After my tech is done I scoot back to my room to get ready.

I spend the rest of the day after tech taking it easy, spending five hours doing my hair and makeup and steaming my costume (cheers for the loan, August Wiled; I now know that the wattage on my travel steamer doesn’t match). I packed and checked all my costume pieces four times. It’s done, it’s time. I run across the hallway to see if Zelia is ready to go downstairs – she is having costume issues with one of her bananas getting squashed in the trip. Aurora Galore (fresh from killing it in debut last year) is in her room being a champion and helping her fix it.

I head down with my suitcase and set my IPod to some serious strutting music through the casino floor. ‘It’s time, let’s do this,’ I tell myself.

The comradery backstage was incredible. We listened to hip hop music while we were stretching, borrowing scissors and hairspray, and when I realised that one of my snaps had come unstitched Renee Holiday asked, “Do you have a needle and thread? I can fix that real quick,” before proceeding to get on her knees to sew it up, her hair still half done. This doesn’t feel like a competition – this is like a family.

Sometimes it’s very hard to know how your show actually went. I know I broke a beaded tassel and had a little slip onstage, I know my pasties stayed on (note to readers, this doesn’t happen often) and I know that I couldn’t see an awful lot apart from the blinding stage lights from the stage. I felt for sure that my big ass would fill up that stage but my short legs needed to take bigger strides. August Wiled and Pastel Supernova were in the changing room. “How did you go?” they ask. “Good – I think?” I respond. I see Pastel’s broken shoe and know something went wrong. I was too nervous to watch the other Debut competitors before my show.

Zelia was about to hit the stage and I sat on the leather couches to watch her on the screen. I know she is killing it and can hear the crowd roaring. I’ve seen her Josephine Baker tribute act many times and know she will be incredible. I joke that I will have an ice-skating moment and kneecap her, but in all honesty we are the closest of friends, having just met through the Miss Burlesque Australia competition the year before. I’d rather fall down a flight of stairs myself than see her perform any less than I know she is capable. I’m so happy that everyone at BHoF has now seen the ferocity and fire that is in her eyes and under her feet. 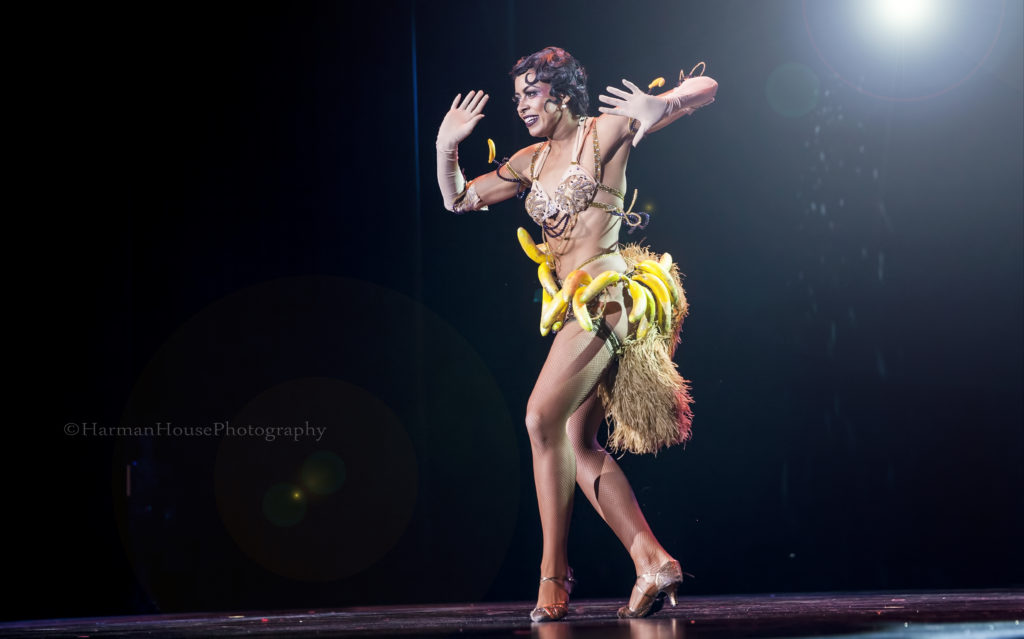 One debut act after the next and finally our section is finished. It’s over. Done. Finito. After dreaming of performing on the BHoF stage for so many years, my dream has come true – in the quickest four minutes of my life. Like great sex that just didn’t last long enough. I change into my post show outfit – a sparkling black and silver sequin dress and pink marabou wrap -shove my Amber Ray flowers into my hair and get ready to go and watch the rest of the show. All my friends are coming up to me and telling me that I killed it. I believe them. I was so happy with how my show went. I was honoured, proud as punch and overwhelmed. During the awards ceremony my stomach is in my throat; I’m happy that I didn’t eat a lot all day.

After the show is done I make my way out to the bar to take pictures with my friends, family and new faces that enjoyed my show. Everything in that moment is one great sparkly blur. All of a sudden I have tears are streaming down my face; all the nerves are getting released and I know I just need to be on my own in my room to decompress. All the pent up emotions can finally come out and I acknowledge that these are tears of happiness, of pure joy and elation.

My best friend, Dolly Cakes, has left a present from one of my costumiers, Flo Foxworthy, for us to wear at the afterparty – a little matching leopard print onesie with my name embroidered on my bottom. Let’s party – and for a rare moment I’m going to wear flats!

View the full list of competition results here and stay tuned for more Burlesque Hall of Fame Weekend 2015 coverage – enjoy all the coverage so far HERE!

FancyFeather.com makes feathery dreams come true! We specialise in luxurious feathers, boas, and feather fans for burlesque and stage/film performances worldwide. Custom orders are welcome, as we have a dye facility on site to match custom colours on costumes or do fancy tip or fade dyed colors. We are a tight-knit, committed group of friends and family with a common goal. Our mission, at the end of the transaction, is to provide you with a smile.
You can’t fake our level of teamwork! It is apparent in everything we do, from our enthusiastic customer service to our pride in workmanship. We love what we do, and are fortunate to have the most fun-loving, diverse customers in the world. Thank you for your support!