When I received an email from Angie Pontani informing me that I had been accepted into the 9th Annual New York Burlesque Festival, I was doubly thrilled. Not only was I offered the opportunity to perform at my first burlesque festival outside of the UK, but I also had the chance to explore New York – somewhere I’d never been and had always wanted to go. Exciting!

As I made plans on where to go and added extra bling to my costume, my excitement was slightly tempered by the fear of the unknown: I would be performing my signature Margaret Thatcher routine in front of a non-British audience. It would be the first time I had done so and I had no idea what to expect. Would an American audience recognise such a British political icon? As hip as New Yorkers were said to be, would they even find it funny? Burlesque colleagues in the UK reassured me that it would be fine but I privately added a bit more sparkle to my costume and thought I would have to wait and see.

On the Wednesday before the festival began I stepped off the plane at JFK airport with my chap Edwin Flay: actor, escapologist and Houdini enthusiast! We had plans which included seeing as much of New York as possible in the six days we were there, visiting various Houdini-related sites and attending nights at NYBF. It’s always going to be a compromise when you’re visiting a new city for a specific event – how much of your time goes on the event, and how much on the city? I decided to attend two nights of the festival, the Friday night Premiere Party at Brooklyn Bowl, at which I was performing, and the Saturday night Spectacular at B.B. Kings.

Wednesday night and Thursday were taken up in a whirl of acclimatising to a new place and walking our feet almost to bleeding to see as much of the vibrant, amazing city of New York as possible. By Friday afternoon I felt the jet lag easing and started to get excited about performing at the festival. I pitched up at Brooklyn Bowl in Williamsburg, Brooklyn for my tech run and to check out the venue before the big event that evening. The venue was awesome; for those UK dwellers used to shabby, run-down bowling alleys where you wouldn’t want to eat, let alone perform, Brooklyn Bowl was a slick, shiny wonderland. Housed in a former iron works, rows of bowling lanes sit alongside a large stage and an impressively large bar. I couldn’t wait to see it full of people later that evening, I had heard it was sold out. Upstairs in the dressing room I met lovely ladies Lillian Starr from Australia and another Honey – Honey Cocoa Bordeaux from Texas. We chatted about the different styles of burlesque in our respective countries and cities, finding many similarities and interesting differences.

After checking my tech details with the crew, I dashed back out to explore a bit more of New York before heading home to pack my costume and get ready to hit the stage. There was already a queue forming outside Brooklyn Bowl when we arrived, and we saw the rooms and the main floor were thronged with eager burlesque punters – and some unfazed bowlers! It was already impossible to see the stage through the people but fortunately there was a large screen in place to make sure people could catch all of the action. I left my chap to find a spectator spot and headed upstairs to the dressing room. This was the usual chaotic tumble of semi-naked bodies and tall men in blue lycra (Scotty the Blue Bunny), glitter and fake limbs flying everywhere as people rushed to get ready. Being fourth in the line-up I was able to watch Scotty get the crowd all hot ‘n’ horny and see superb performances from Honey Cocoa, whose booty shakin’ was awe-inspiring, and Philly Caramel who had a jaw-dropping garden-inspired costume, the floral beauty of which I cannot adequately begin to describe. 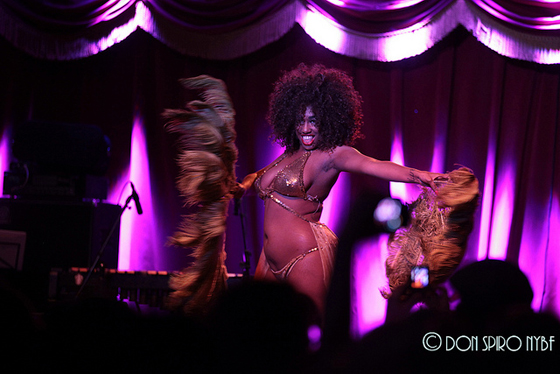 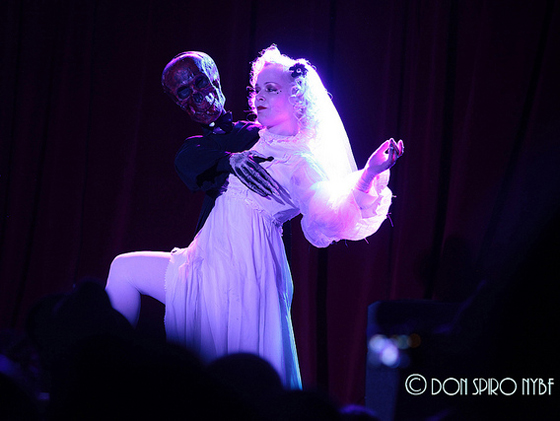 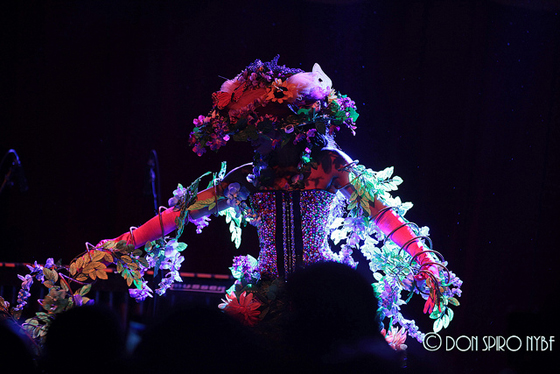 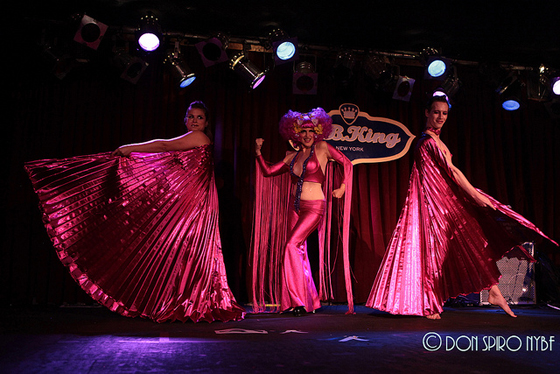 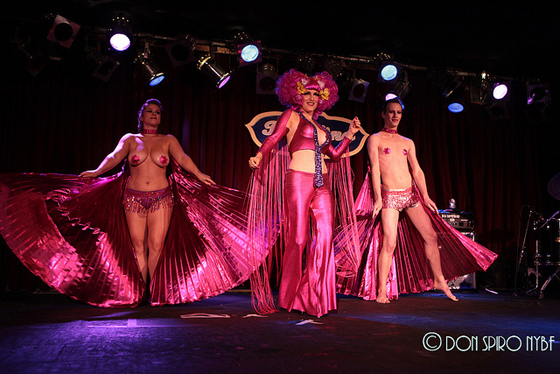 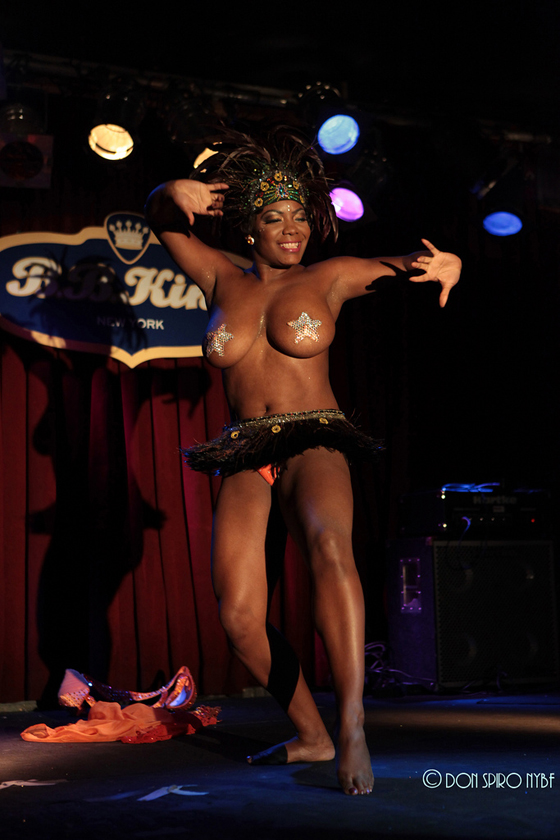 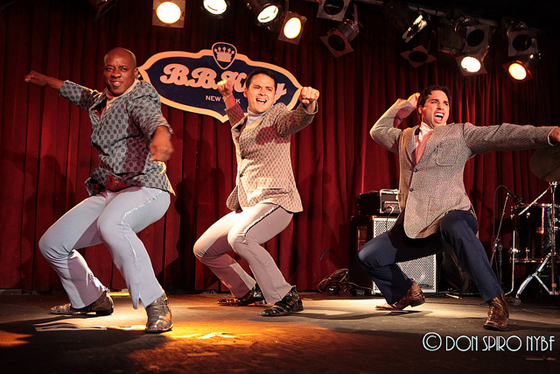 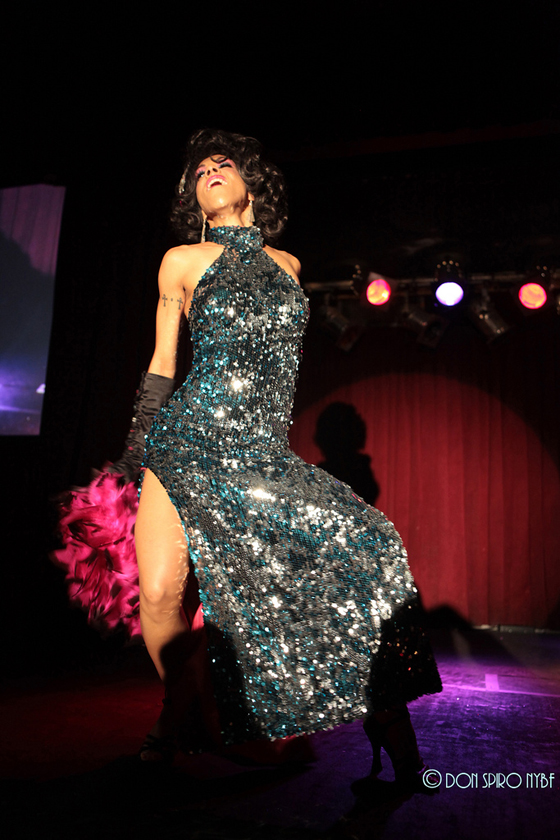 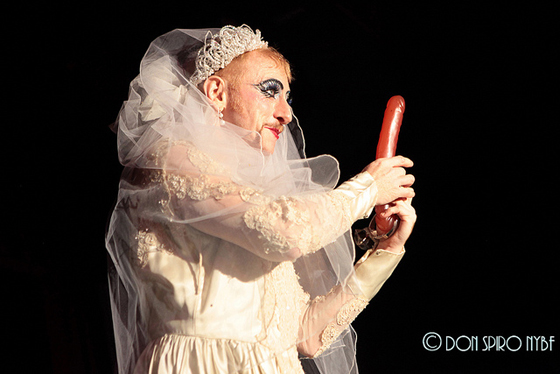 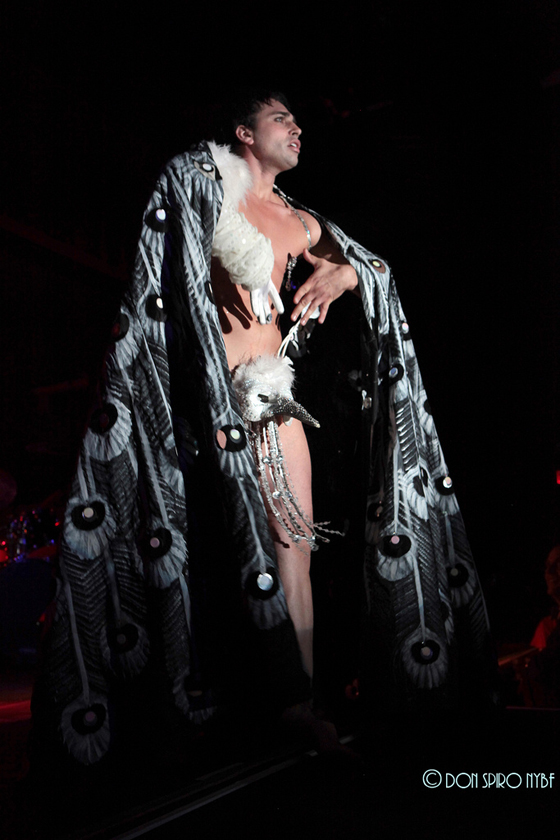 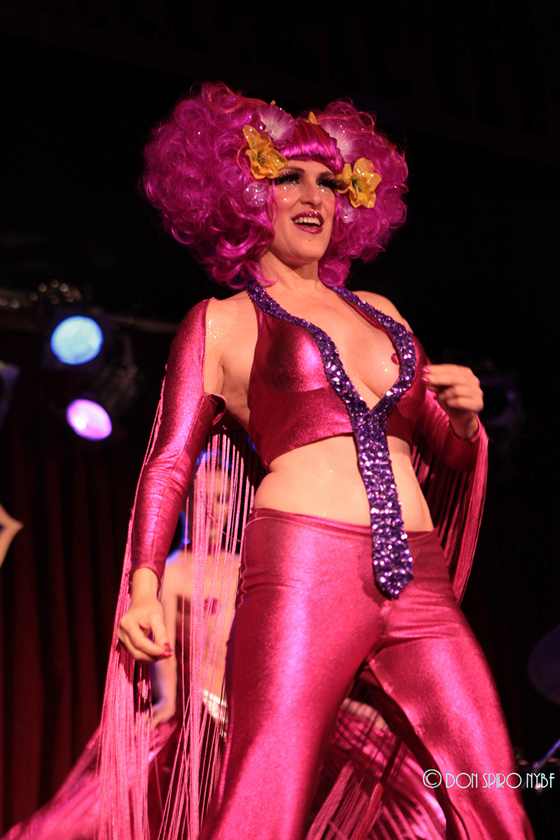 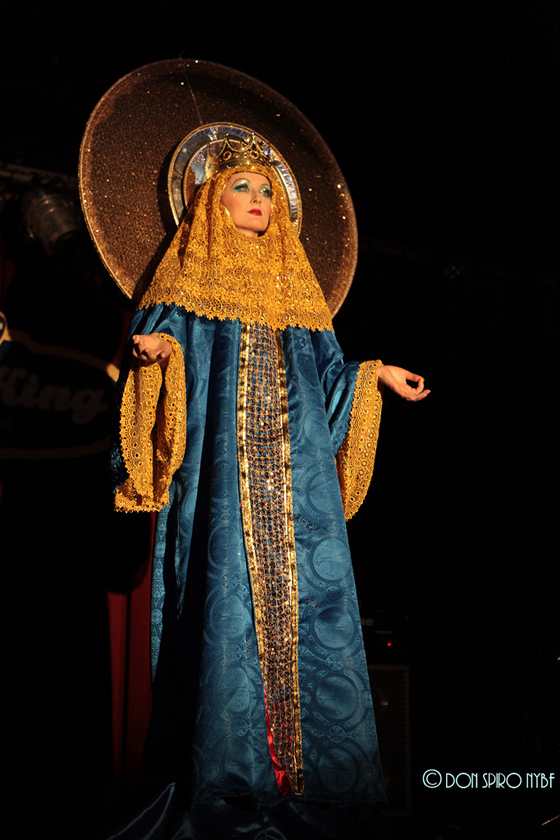 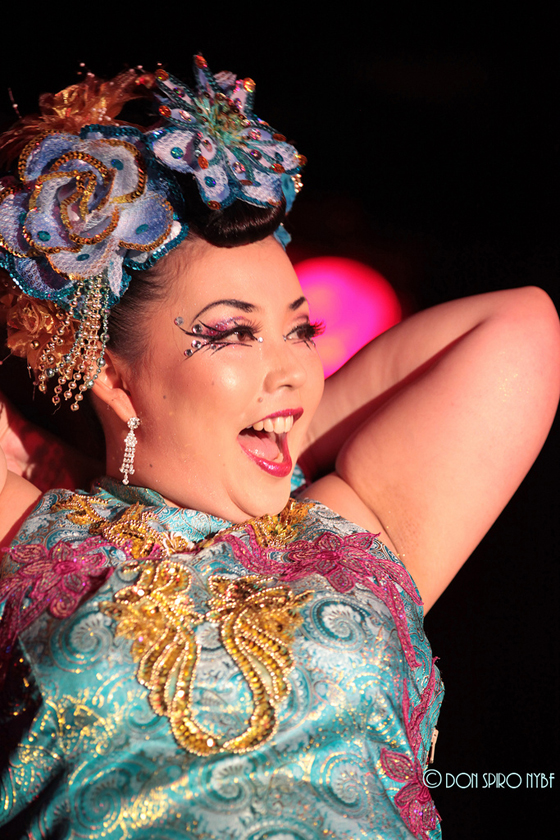 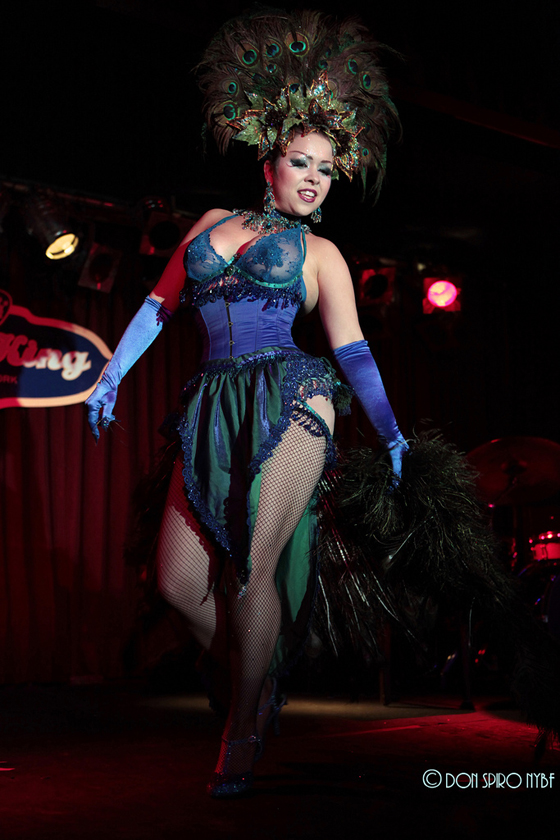 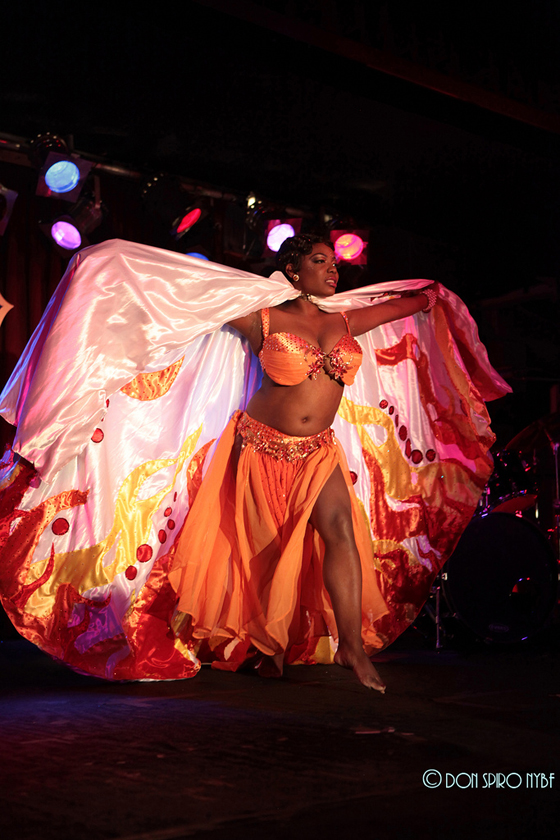 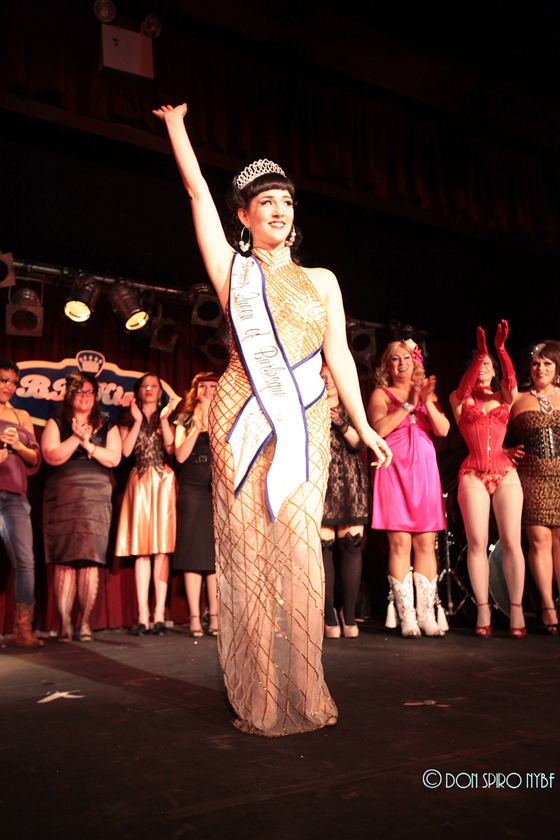 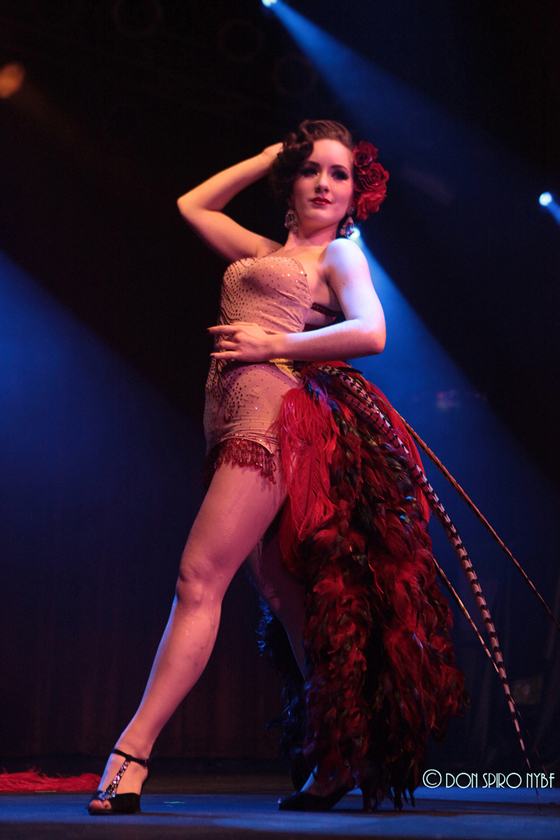 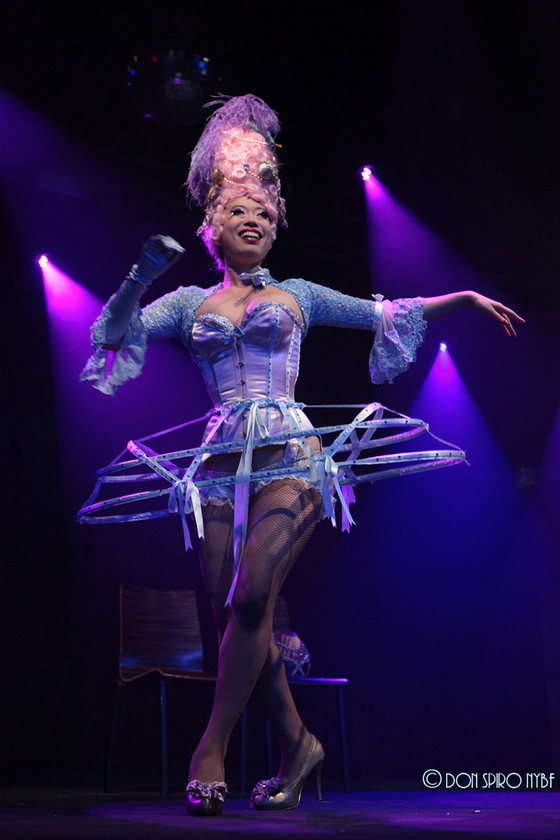 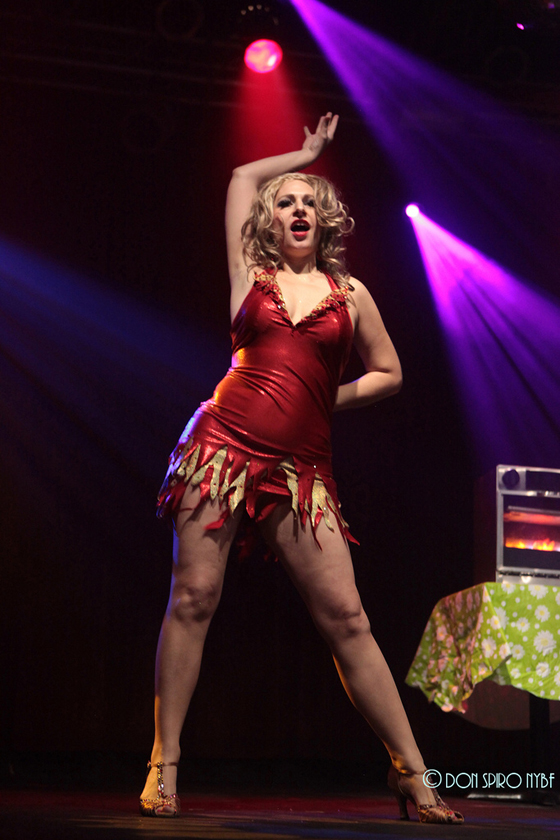 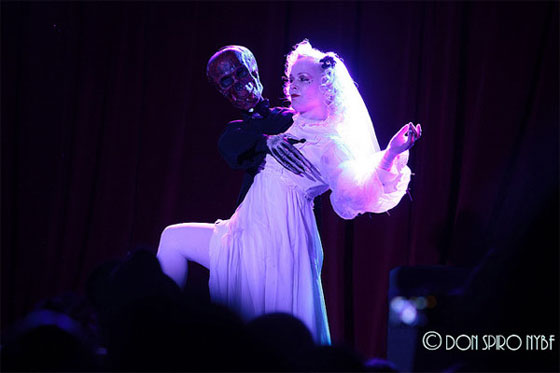 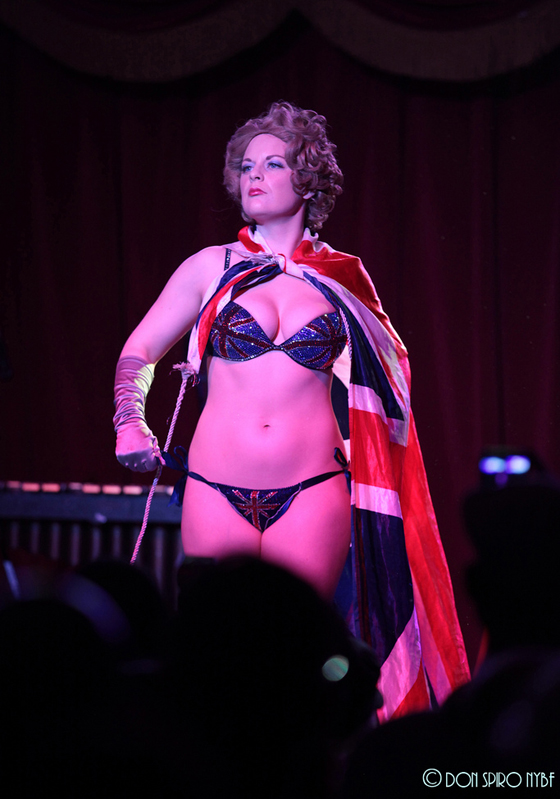 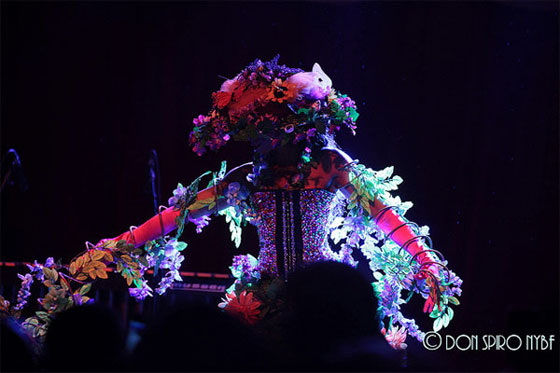 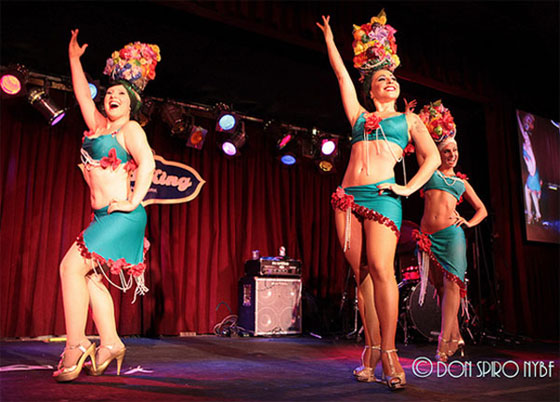 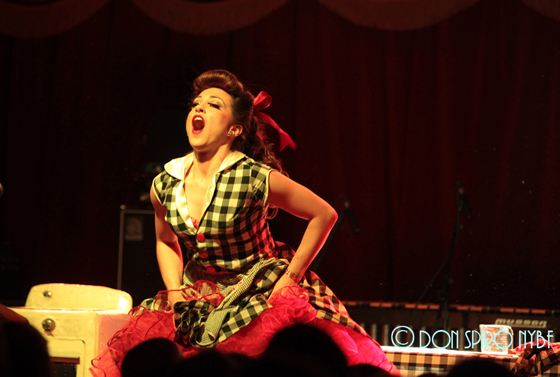 When it was my turn for my ‘turn’ I found the New York crowd to be warm and appreciative. Margaret Thatcher may not be a well known figure in the US but that didn’t seem to dim their applause, and I was very grateful they gave me such a vocal introduction to NYC burlesque! I enlisted the capable backside of New York boylesquer and maid-for-the-night Dizzy Swank to be my whipping boy, and his rear gave a commendable performance – thanks Dizzy!

Dashing backstage to change I missed several of the acts after mine, but found Edwin in time to watch one of my favourite performances of the festival, Bon Bon Bombay‘s ‘Horror Bride’. Duo-personality acts, where each half of the performer’s body represents a different character, are notoriously difficult to do, but Bon Bon pulled it off with ease, using her dead husband half to strip her bride half in an act which was perfectly timed and brilliantly executed. I learnt from Bon Bon the next night that she performs with a vaudeville circus troupe in Montreal, and it was easy to see the influence of that in her well-crafted performance.

It’s hard to recall every moment of the sheer breadth of talent that I saw, but other acts that I enjoyed included Miss Ekaterina‘s graceful mermaid act and Australian Lillian Starr‘s astonishing baking act finale – the best use for a rolling pin I have ever seen! It was also great to see Little Brooklyn and the World Famous BOB in the flesh after following their acts online for several years, and Harvest Moon, whom I first saw in London two years ago, was as glorious as ever.

The following night I attended the Saturday night Spectacular by myself at B.B. Kings. After being more than a little dazzled by Times Square at night I was prepared to be dazzled again by the talent and the costumes of the performers on stage. I arrived half an hour before showtime and once again the joint was rammed. I would have liked a chance to check out the merchandise stalls but it was all I could do to squeeze past to the bar! It was great to see the support that NYBF gets from the home crowd, but it did make seeing the stage rather difficult. The stage had two screens either side showing the acts to assist the audience; unfortunately these were the same height as the stage so I couldn’t see them either. Those in the cabaret seating obviously enjoyed what they could see as they whooped and hollered through the excellent swing band set which kicked off the evening, and through all of the acts. Murray Hill, excellent as always, kept the night fun and frisky but I only got snatches of each of the acts before I gave up and left, frustrated with staring at the back of people’s heads, even in heels.

I did enjoy Nasty Canasta‘s Bambi tribute, the World Famous Pontani Sisters‘ tightly-choreographed Mambo act and Jett Adore‘s beautiful, immaculately executed peacock act. I heard someone breathe beside me, ‘I love him!’ as the last notes echoed and the applause rained down and I had to, just as breathlessly, agree. It was also a real treat for me to see Indigo Blue perform as I’d read so much about her award winning performance at the Burlesque Hall of Fame weekend.

New York, New York, I had a blast. From an outsider’s perspective, NYBF felt like a real celebration of New York burlesque by the community and the audience, which made me feel privileged to be a part of it this year and a little sad that there isn’t something that does the same in my own city to the same extent. Long live burlesque this vibrant and passionate!