Our next stop is Canberra, which is Australia’s capital city by name only. Probably our coldest stop on the tour (note: overseas audiences will laugh at Australian’s definition of cold). Not much goes on here but politics and museums. They have a rocking little burlesque scene.

Our show for Canberra was at The Abbey, a converted church with intricate and lavish wooden carvings and a very grand pipe organ. There is something extra special about getting naked in a holy place.

There was a little bit of magic coming from the audience this night. And Jacqueline Furey opened the show giving it right back to them. A perfect infusion of gimmicks, tricks and pulling a rabbit out of her hat with a cute and sexy striptease.

Crowd favourites included boylesquer Lorde of MisRule, who brought his Dr Who number, excellent execution of boa work with a very long scarf; and Pickled Tink, who sashayes sweetly on the stage in a huge, elegant purple gown. The only down side of this show was an inexperienced lighting technician.

The next day we packed up and jumped in the tour van for a long drive to Sydney. Dirty Martini had her first viewing of kangaroos on the side of the road (no, they were not dead), and Dolores Daiquiri made sure we continued the ABF tradition of stopping for meat pies on the way. Already, Elena Gabrielle was brewing daily doses of ginger, honey and lemongrass tea concoctions – her professional vocalist method of preserving her voice through such an intensive tour.

I missed out on a lot of tour shenanigans (not to mention the first few episodes of the new season of Orange is the New Black) while in Sydney as I spent a few days snuggling in my bed at home. I was happy to ditch superfluous makeup items, repack my suitcases with evening gowns that had already made their appearance, and catch up on some of my freelance writing deadlines.

Victim number two of showgirl influenza: Zelia Rose. I got the call from “the Dac” while picking up Bella de Jac on the way into the metro, “Zelia is really, really sick. She can’t do the show tonight. Do you want to swap nights?” Sure thing, rest up sweetheart. Not in the least bit worried about jumping onstage for Saturday night rather than Sunday, we simply turned the car back around to pick up the wigs, the bags and the ten kilograms of my facial warpaint.

Sydney Big Tease was at the beautiful and opulent Metro theatre. One of my favourite venues to perform at in Sydney, complete with big dressing rooms, and possibly some of the best stage lighting of the whole festival. I was backstage for the whole night, but managed to watch side of stage for a few special performances.

Dirty Martini taunted the audience in the front row with utterances of, “Can you see my pussy?” Had them blushing in the front row. ‘Purple Haze’ was so fierce this night – her command of a big stage and a big room is second to none. Dirty dances with such abandon every time she hits the stage and she truly let loose on the Sydney audience.

The introduction of a new spot on ABF as featured icon truly belonged to none other than Australia’s Queen of burlesque, Imogen Kelly. I snuck a peek of Imogen’s new feather-free peacock number ‘L’oiseau’. What a sight to behold. She emerges from the side of the stage, slinking slowly. It actually looks like a peacock. Then puppets, a giant egg headpiece, the egg turns into a baby, more puppets, then full 180 fans that attach from her hands to her ankles… and then she cartwheels around the stage. I was standing side-stage screaming, “What the fuck?! for the entire duration of the act. 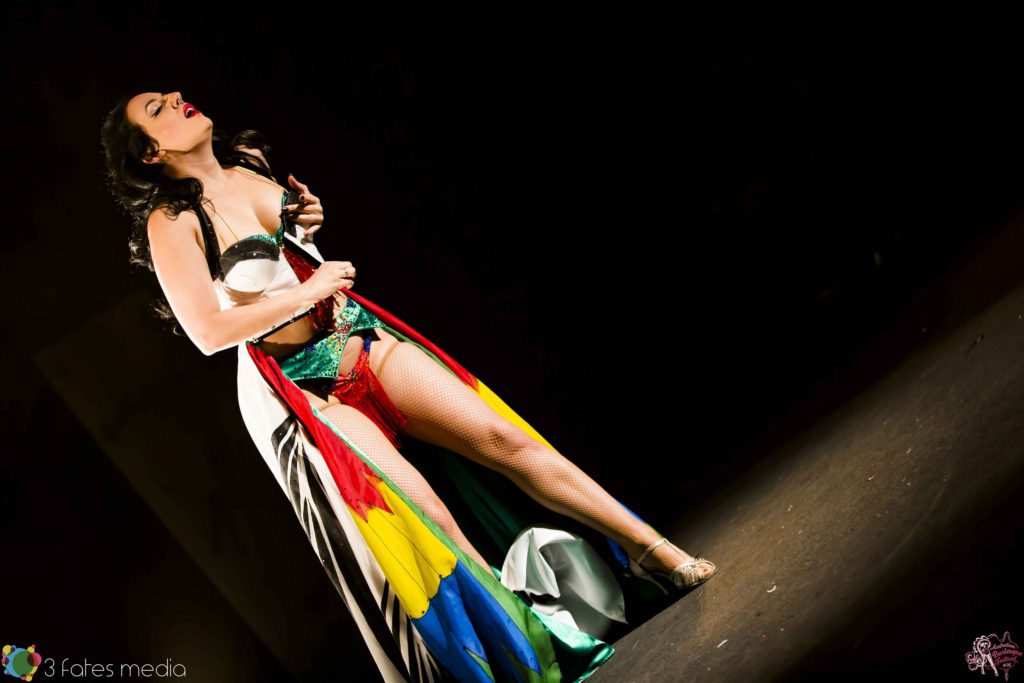 Reigning Miss Burlesque Australia, Bella de Jac, perfomed her parrot number which blasted vibrant technicolour while executing precision bunny-hops (hurts my thighs just thinking about it). Her tribute to burlesque legend Blaze Starr and all the bad girls of burlesque.

I was super pleased to get to meet Valerie Stunning on this night, a gorgeous performer from Las Vegas, whose number I didn’t get to see but I did slow motion feed her pizza at the after-party.

Tonight was a rainy affair but it didn’t deter the audience. I even wore a waterproof dress in the rains honour – a casual full latex gown. In Circular Quay in Sydney, we descended into the popular jazz haunt, The Basement for a heated show. Opening the night was San Diegan Di’Lovely. My thoughts on this number were simple: “holy duly sex in a black mesh bodysuit.”

American burlesquer Caramel Knowledge made her second appearance at the festival and was a sheer joy to watch onstage. It’s a real pleasure to have internationals grace Australia’s stages and I couldn’t tear my eyes off her.

There were a few killer home-grown acts for the night. Including Brisbane gal Lenore Noire performing her uniquely Australian ibis bird routine. Sounds glamorous right – this bird is also known as the bin chicken, and Noire basically deep throats a sandwich. It’s poetry in motion. 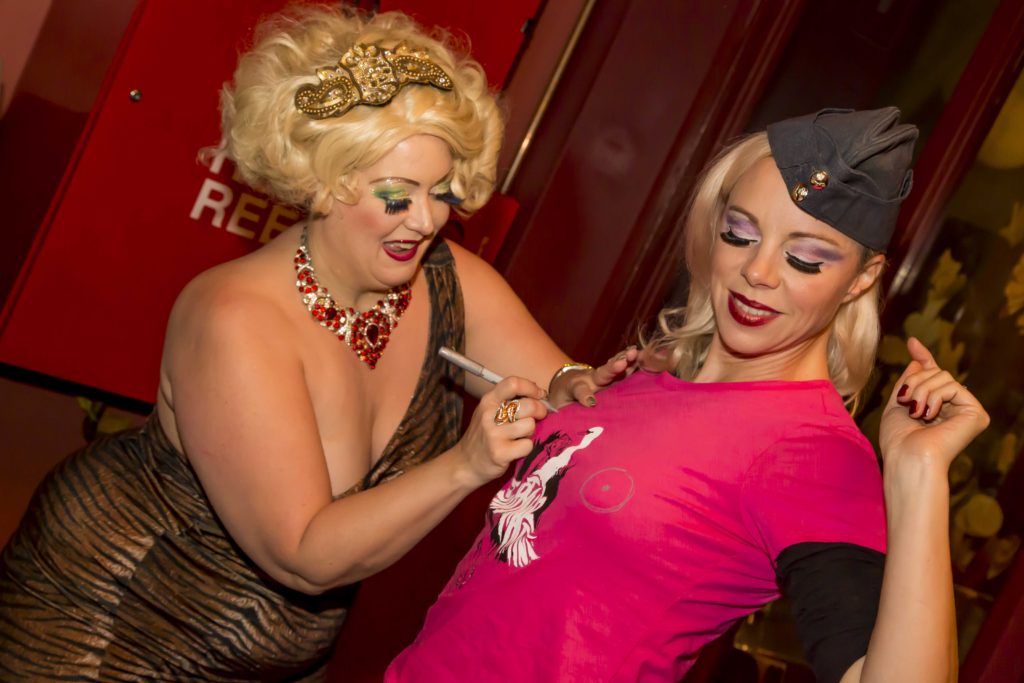 Betty Lovecat performed her pizza routine ‘You are what you eat’. Lovecat’s brain is weird and amazing – she is a pizza who strips food layers and ends up doing a martini glass number in a bowl of spaghetti. It made me hungry and yes… possibly the reason the night’s after-party was at a pizza joint. Excuse the pun, but it’s cheesy and sleazy.

My favourite act of the night went to Fancy Piece, who in my opinion is the definition of Sydney Burlesque. This queer, gender bending duo never disappoints. They performed a deliciously sacrilegious Jesus/devil duo which made me blush. Blush and scream.

Sydney was able to finally get their dose of Rose, turning up to perform in fine form. Zelia was feeling well enough to headline the show, and you couldn’t for one second tell that she had been basically comatose the day before.