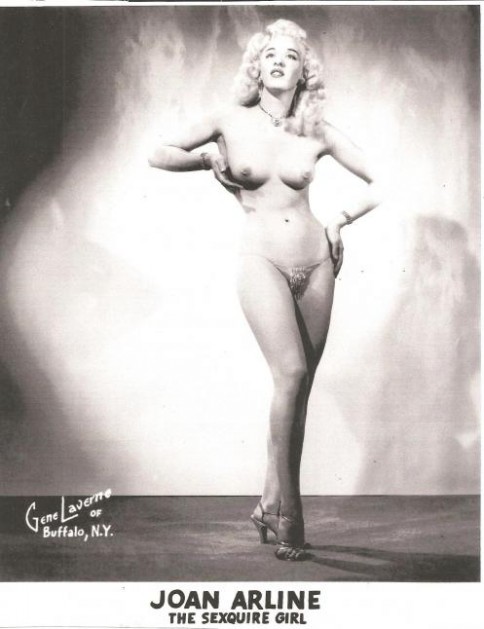 Sad news made its way around the burlesque community yesterday – Joan Arline, The Sexquire Girl, passed away on Sunday, October 16th from leukemia. Her last official performance was in June at the Burlesque Hall of Fame Reunion, and it has been reported that she was diagnosed with her illness that same month.

Just last January, Joan visited Seattle to perform in The Swedish Housewife’s Gypsy Rose Lee Centennial Show. I had the extreme honor of visiting with Joan at her hotel for an hour to talk about her career, and she made an indelible impression on me. As anyone who met Joan knows, she was a dyed-in-the-wool showgirl and “broad” in the most classic sense, and she was quite a talker – energetic, funny, unapologetic, and quick to recount a story as if it was yesterday.

Joan was nothing if not tenacious and plucky, peppering me with questions about local producers and asking me to keep certain trade secrets to myself, for fear another showgirl might steal her teaching curriculum. She didn’t mince words, talking earnestly about her start in strip, her four husbands, and the way that she planned her life and then made it happen. Joan was a determined professional who believed in the power of bringing an audience to the edge of their seats through the careful buildup of the tease. “Do you screw on the first date?” she said of watching her dance students’ entrance walks. “Honey, you’re giving it away too fast!”

Joan started in burlesque at 21, as a chorus girl at McVan’s Night Club in Buffalo, New York, entering into burlesque proper on the suggestion of her first husband, musician Don Roth. “We didn’t know the word burlesque,” she told me. “And if we did, we didn’t admit to it… My father said I went into show business so I could bleach my hair and not have people talk about me.”

Soon Joan became a headlining star; trading up from her $75 a week/3 shows per night/7 nights a week gig as a chorus girl to a lucrative $150 for the weekend as “the exotic dancer”, as she referred to herself. “You didn’t have to be Einstein to figure out what I was going to stay with,” she explained. Joan told me her biggest fear at that time wasn’t the dance – she had formal dance training all her life – but that she might be so consumed with her steps that she’d forget to take her clothes off. Don Roth wrote a special ripple into her songs as a cue for that purpose. She traveled the burlesque circuit from 1953-1958, taking time out to have children and then getting back into the business again 35 years later when she auditioned for a “55 or better show”- “I was a hell of a lot better!” she laughed. “Better and better.”

We talked briefly but with no regrets about her four marriages – “It’s like a dance step, you keep practicing until you get it right”, her famous pair of trained Russian wolfhounds, her floor work (done on a pink fur-covered chaise and not the floor, she clarified), and about aging – “You’re just a baby. I’ve got shoes older than you.” Joan spoke fondly of her co-stars and the producer for that night’s show, The Swedish Housewife, who she had known for many years. “Paula calls my act the Seven Approaches TO a Man,” she said. “But it’s really the Seven Approaches OF a Man – trust me, that’s a whole different thing!”

Joan Arline was one of the brightest, most resilient showgirls burlesque and striptease have ever known. She was loved and admired by many, and will be missed. Her brassy spirit and passionate love for being on stage will never be forgotten.