The fabulous Gentry de Paris kindly agreed to create a photo diary during her trip to Montreal. Enjoy the journey! 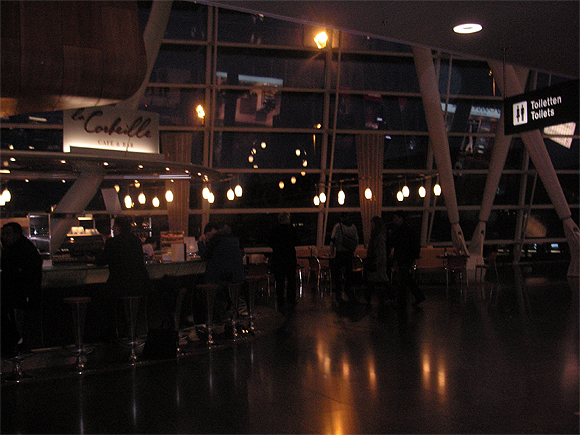 The day started at the ungodly hour of 5 AM. Even 5 AM in Paris is painful. Unless of course you’re just getting home, which is what I’m usually doing at that hour. But I had a 7 AM hop to Zurich to catch the long flight to Montreal.

Normally I hate non-direct flights, but the Zurich airport is my favourite in the world.
It’s super stylish, has the best designer boutiques and a caviar bar. And there’s usually no one waiting at the chair massage kiosk

Switzerland is also one of my favourite countries because it’s so bizarre. It’s not actually even called Switzerland or even Suisse. The real name of the country is Confoederatio Helvetica and they don’t have one national language, but four (French, German, Italian & Romansch). Except no one in eastern Switzerland (i.e. Zurich) speaks French. And the German they speak is their own brand of Swiss German (Schweizerdeutsch) which makes very little sense to those of us who learnt real German.

It’s a topsy turvy country, but the airport is stylish and caviar with an ice-cold shot of vodka is truly the breakfast of champions.

So I hopped on my connecting flight to Montreal, popped a Xanax, watched a George Clooney movie and slept most of the way… 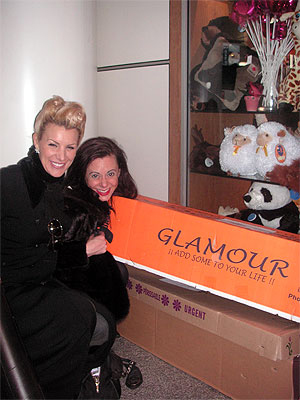 Nine hours later we arrived in Montreal without incident. I was expecting a driver to collect me and my eight-hundred heavy bags, but instead, the tiny, gorgeous Scarlett James (star and organizer of the show) and her adorable husband David personally came to collect and welcome me!

Scarlett brought me a big box of glamour which was much needed after the nine hour flight. (It also comes in tubes in Canada). She’s thoughtful like that. I bought her a dozen pain au chocolate that were a little squished, but still baked fresh in Paris that morning.

All of the out-of-town headliners were staying at a very stylish boutique hotel in downtown Montreal, just walking distance from the show’s venue. I took the longest shower in the world’s biggest shower and then ventured out for… Poutine!

Poutine is the most magically delicious dish in the world, and for some strange reason you can only get it in Montreal.

This was my real motivation for doing this show. Burlesque schmerlesque; I can take off my clothes anywhere. But in Montreal they have POUTINE!

Poutine is simply French fries in gravy with rubbery cheese curd slightly melted on top. But the combination of carbs, salt, gravy and cheese make it just, well, worth a nine hour flight.
Yes, it’s hideously fattening. Yes, I ate it every day I was there. Usually with a healthy salad (as pictured below). 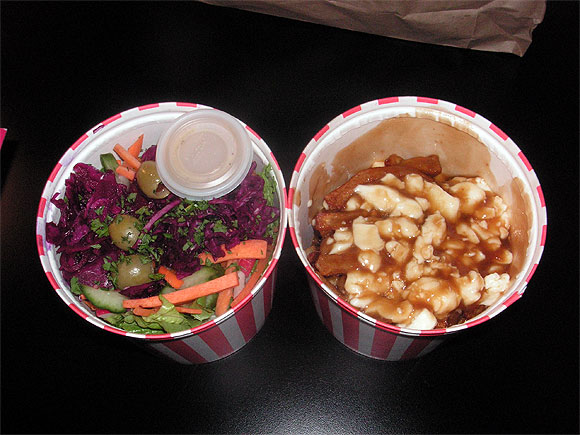 The next day we had a press conference at noon. Glammed up and ready to gab, we met a small army of Montreal’s journalists and bloggers.

It was also my first time meeting most of my fellow dancers in real life. Amber Ray is based in NY, Coco Framboise in Toronto, Michelle L’Amour in Chicago, Scarlett James in Montreal, and Renea Le Roux is newly transplanted to her hometown of Atlanta. I’ve been living in Paris for twelve years, and while all of these girls have been burlesqueing for eight or ten years, I only knew them by their stellar reputations or via facebook. But they all knew each other from performing in other shows.

Initially, I was a bit intimidated being the odd European out. But boy have I missed out. What a great group of kind, fun, wacky, smart, kick-ass performers and nice girls.

Cream rises. I find that the top in any industry are the hardest workers, the most serious professionals and the most thoughtful people. This show was no exception. 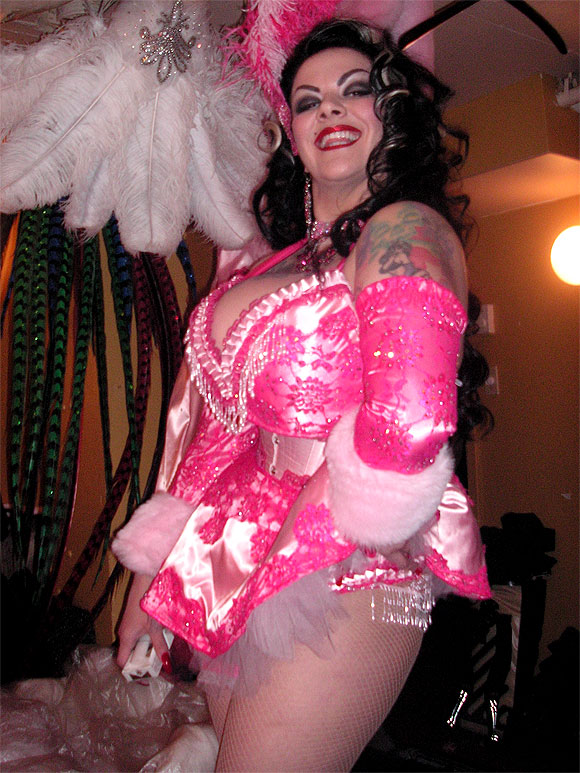 I love everyone I met that weekend, but can I just say that Renea Le Roux is one of the most beautiful, statuesque, absolutely fascinating women I’ve ever seen in real life. She’s bigger than life, physically and metaphorically. Her hourglass figure is gorgeous. Her bust is magnificent! (I had breast envy all weekend). And that’s her real hair (no extensions) or even need fake eyelashes! She’s 100% the real deal and we should all be so lucky to have just a sliver of the glamour that she has going on.

And Amber Ray I hope will be my friend for life. She has a true artists soul and a capacity for creativity that’s astounding. (I wonder if she’ll kill me if I told you how she made her gorgeous white feather head dress…)

Everyone got nicknames over the weekend. Amber was The Axl Rose of Burlesque… 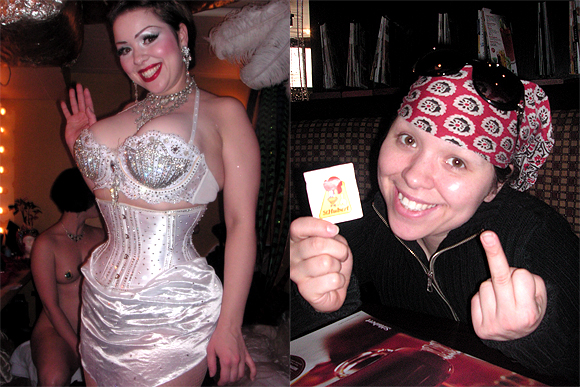 Renea was Tits McGraw or Tits [Insert Any Last Name Here].
Here I am not even trying to hide my breast envy: 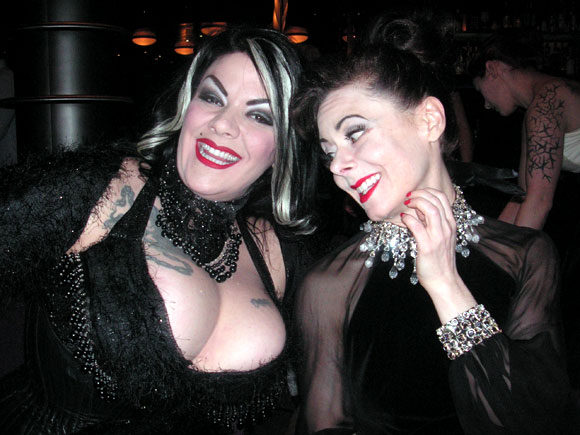 Scarlett was ‘Our Fearless Leader’. My nickname was ‘That Little Skinny One With No Tits.’ 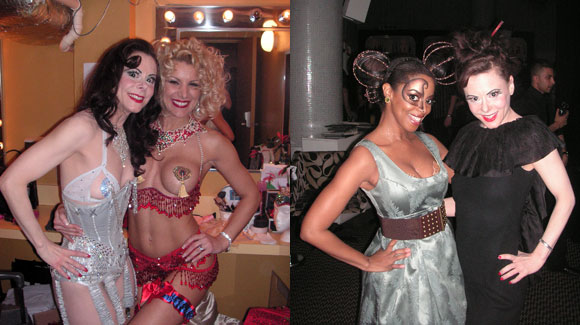 So kooky hi-jinx and salty carbs aside, it was time to get down to real glamour (and I’m not talking about the boxed kind).

Friday night was the first Canadian screening of Immodesty Blaize’s movie Burlesque Undressed.” Readers – stop what you’re doing right now and order this DVD. Watch it because you will love the interviews with the legends, and then hold a viewing party for all your friends and family. This is the perfect Burlesque 101 film and the general public desperately needs to see what Burlesque is and where it all came from. 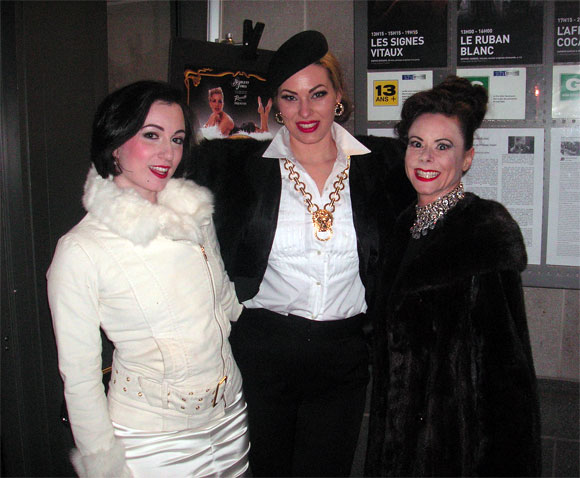 We met for cocktails before and had cocktails during the film and guess what – cocktails after! Limos whisked us off in true rockstar style to Le Pois Penché where we ate snails, oysters, steak tartar and other such weird things that I eat every day. 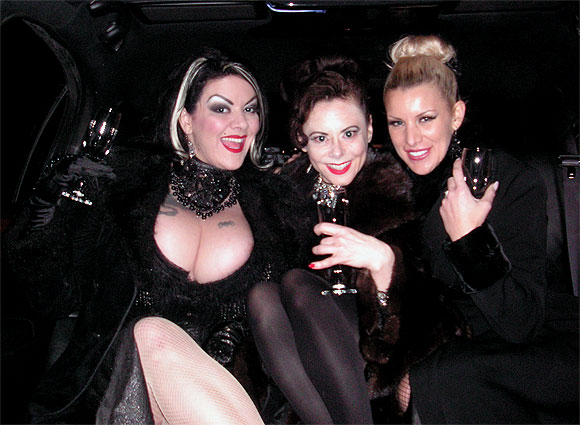 The next day was rehearsal with the big band.

I’ve danced with probably a dozen big bands before, but this was by far the best. And the sound and lighting guy were gods among men. (To all the non-performers reading this, just go to sleep while I geek out on burlesque tech stuff). They had my favourite pink gels as requested, the playback on stage was loud enough, the lighting effects were perfectly synced up. And the band didn’t even mind when we asked them to play slower and sexier. Plus the stage was huge, clean and had a little skirt where we could get close to the audience.

There is nothing better than being sandwiched in between seventeen swinging musicians behind you and a roaring crowd in front of you.

Just look at what the venue looked like during rehearsals… 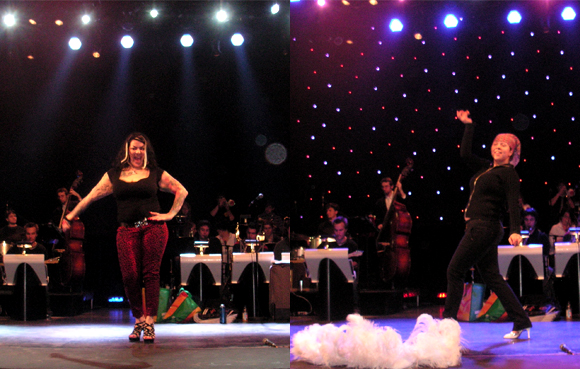 Rehearsals went so smoothly that there was time for a power nap and a leisurely lunch before we started suiting up, glueing in and applying the paint. (How often does that happen? In my experience, almost never! Thank you again to Scarlett, David and their über professional crew for the least stressful show I’ve ever had the honour of performing in…) 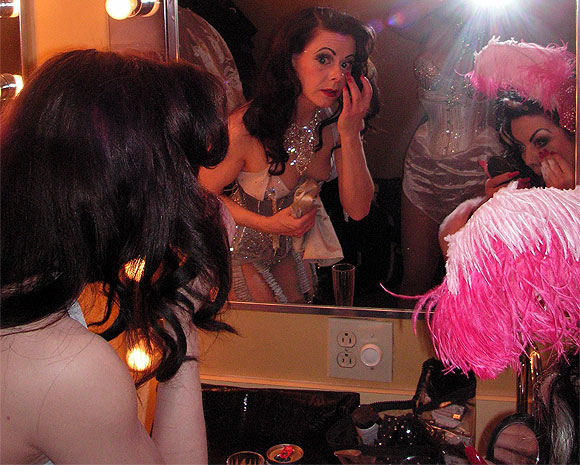 The show went off with out a hitch; I’ll let the infinitely more impartial and professional Tanya Cheex give you the skinny on the show (Click here to read her review!). Because from where I was watching, we were all AWESOME. 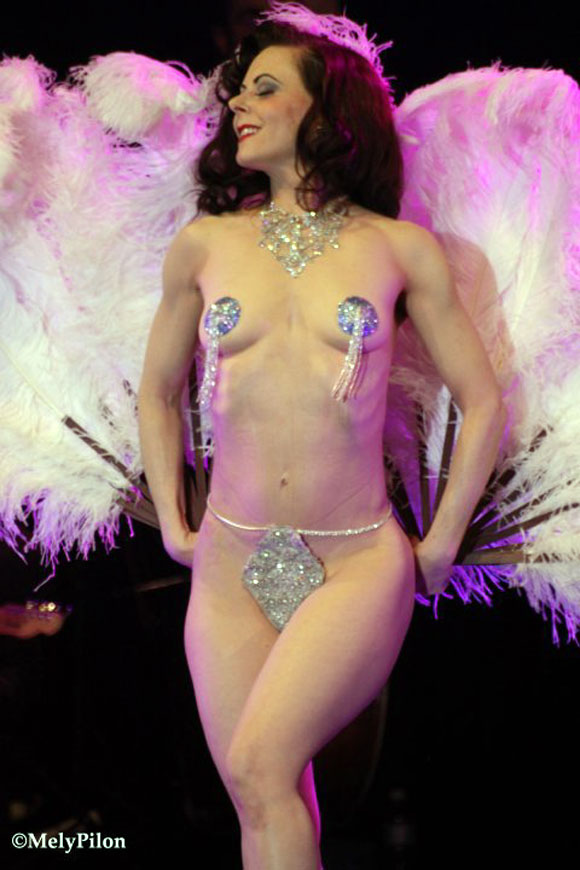 And after the show – more champagne and French food at La Pois Penché and the after party in the club back at our hotel. 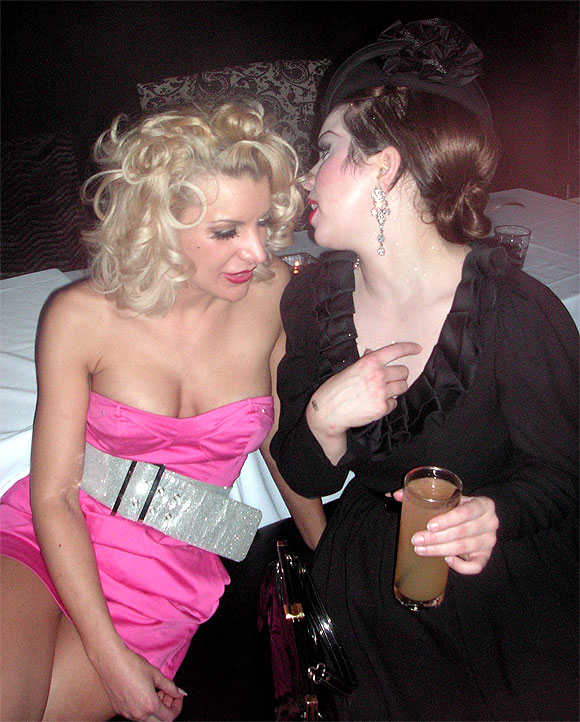 And Coco Frambois (of the Jamaican Frambois) can’t be anything other than photogenic. I clearly need to take lessons!

You would think that would be the end of great show and great weekend, right?

You would be wrong! Scarlett spoiled us even more by organising a photoshoot with the fabulous Andréa Hausmann, one of the top pin-up photographers working today.

Andréa is adorable and her studio is *gorgeous*. And there was the holy trinity (chocolate, pizza & champagne) to help us with the post-show crash and back into our glamorous costumes from the night before.

There was a group photo… 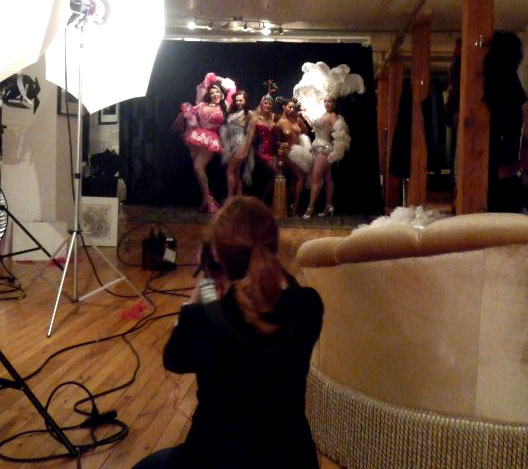 And we each got some one-on-one time with the Master herself.
Look how beautiful Andréa made me 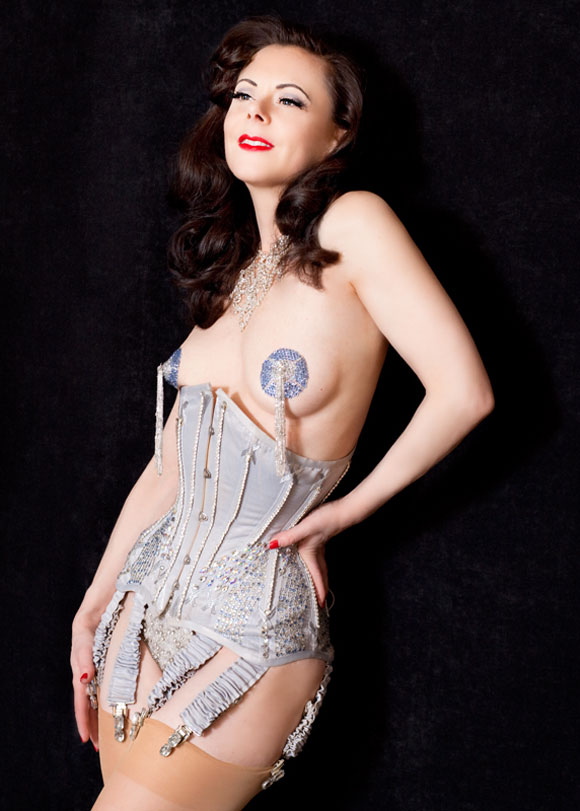 What a whirlwind weekend! Our Montreal audience was amazing. They whooped and hollered and stuck around to congratulate us after the show. The show tech staff were top notch. Our fellow non-stripping performers were first rate. And everything was easy peasy.

Thank you Scarlett for putting together this really high quality show, for bringing burlesque to Montreal, for raising the bar for all burlesque promoters (myself included!), for anticipating our every needs and for spoiling us silly.

I’m happy to have some shiny new strip-teasisters in my Burlesque family and new fans and friends in Canada.

We won’t talk about the extra poundage from all the poutine!

The Feral Feminism of Baby Got Back